Flabba of the South African hip hop group Skwatta Kamp may be gone and buried, but his memory lives. Stabbed to death by his girlfriend in 2015, Flabba has managed to live in the consciousness of the music community in South Africa since his death.

Yesterday 9th March 2021 was the 6th anniversary of his death, and the hip hop community in South Africa paused briefly to pay homage to one of its champs.

L-Tido and DJ Jawz are among the musos who have paid tributes to the late Flabba’s memory on the anniversary of his death.

DJ Zan D was effusive in remembering the slain rapper. According to the DJ 2015 will forever remain a sad day in South Africa. He thanked the late rapper for the music he left behind, making it known that South Africa misses him and will forever celebrate him. 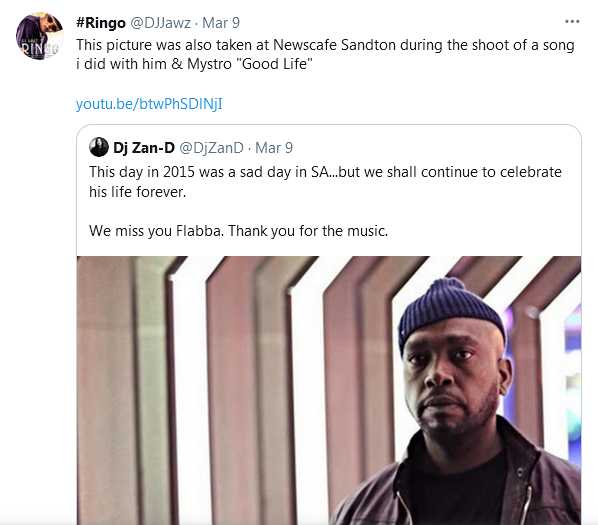 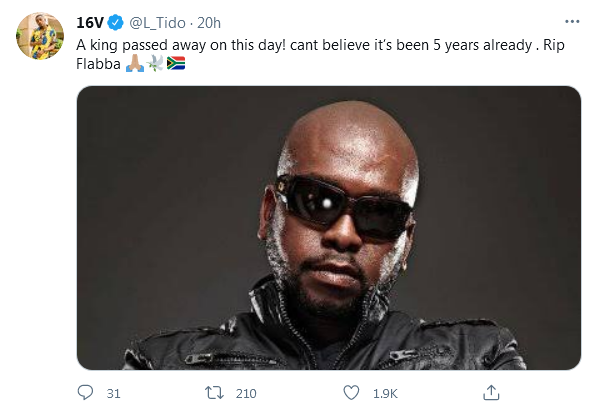 Culture critic Lavida Nota was not left out. The controversial figure dropped a laconic “RIP Flabba” on Instagram.

By the way, Sindisiwe Manqele was Flabba’s girlfriend and the lady the court found guilty of his murder (by stabbing). Jailed, she managed to graduate from prison.

Wanna memorialize Flabba as well? You may drop your words in the comment section below.

Tags
Flabba
John Israel A Send an email 10 March 2021
Back to top button
Close
We use cookies on our website to give you the most relevant experience by remembering your preferences and repeat visits. By clicking “Accept All”, you consent to the use of ALL the cookies. However, you may visit "Cookie Settings" to provide a controlled consent.
Cookie SettingsAccept All
Manage Privacy