Nandi Madida is excited as Black Is King secures a Grammy nomination. For most Africans, a Grammy award is the ultimate bragging right, and Nandi is looking forward to winning.

Black Is King was nominated in the Best Music Film category. The songstress had played the role of Nala in the titled film which also featured Beyoncé and several others.

Nandi Madida announced the nomination the movie had secured at this year’s Grammy awards, thanking those who have been supporting the flick. She also wished her team members the best. 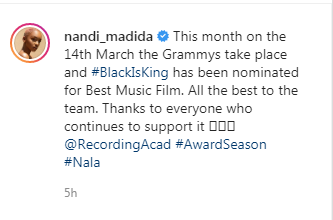 If Black Is King should win the Grammy, this automatically makes Nandi Madida a Grammy award winner – a milestone many aspire to in their lifetime but never achieve.

A Grammy nomination adds to Nandi Madida’s string of successes. The songstress recently bought a Mercedes Benz SUV, happily announcing to the world that she has joined the Mercs club, as Mercedes is called by diehard fans in South Africa. But would she snap a Grammy scudetto eventually? Time will tell

Well, do you think Black Is King will eventually win a Grammy? Why or why not? You may 2ant to join the conversation by ddropping your thoughts in the comment section  below.