The “Zulu Man With Some Power” Nasty C’s “Lost Files” EP is apparently “lost” and y’all can’t find it on Apple Music anymore. But there’s an explanation – from the songster himself.

The songs on “Lost Files” EP might no longer be available on Apple music, but fans cans access them on YouTube exclusively. “Lost Files” was released back in may this year and consisted of songs that did not make it to Nasty C’s “Zulu Man With Some Power” album.

The EP apparently disappeared from Apple Music without prior notice from Nasty C and his agents. A curious fan had noticed this and asked the songster why the EP was no longer available on the music steaming platform.

In response, Nasty C had stated the EP was no longer available because he lost the files. His response elicited mixed reactions from his fans, with some of them stating that the “Lost Files” project was the best work from the Zulu Man this year. 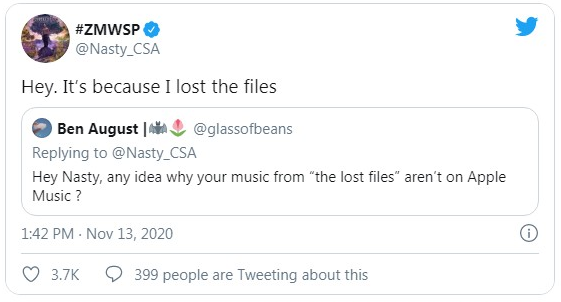 Others were just not impressed with the champ’s reaction and urged him to get the songs back on Apple Music?

Well, what do you thin? You might want to join the conversation by dropping your thoughts in the comment section below.