Nasty C opens up about his investment strategies and how it felt being on The Ellen DeGeneres Show.

February was a great month for popular Mzansi rapper, Nasty C who continues to set the pace for others to follow. The talented rapper closed out the month by performing on The Ellen DeGeneres show with his American collaborator, Dreamville’s Ari Lennox.

The two performed the song “Black And White” which is the official soundtrack for the forthcoming film “Coming 2 America” starring Eddie Murphy and more. In a recent interview with DJ Sabby, Nasty opened up about his Networth which is just about $2 million (about R29 million).

He spoke about how he is investing his money, and also how he is spending it. He also revealed how it felt to perform on The Ellen DeGeneres show. That’s a pretty huge deal for Mzansi and we are all proud of him. Nasty also recently launched the ZMWSP podcast. 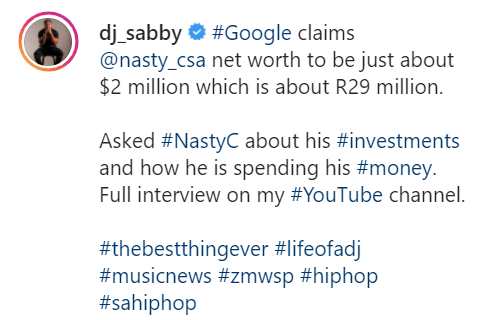 Tags
Nasty C
John Jabulani Send an email 2 March 2021
Back to top button
Close
We use cookies on our website to give you the most relevant experience by remembering your preferences and repeat visits. By clicking “Accept All”, you consent to the use of ALL the cookies. However, you may visit "Cookie Settings" to provide a controlled consent.
Cookie SettingsAccept All
Manage Privacy