South Africa’s trap ace Emtee has been named winner of the Global Music Awards Africa in the hip hop artist of the year category.

Chuffed about the awards, the songster had shared the news of the win with his fans in a post on Instagram, commenting that a good man cannot be kept down. The reference is, of course, to his music. The post, which you can check out below, had most of his fans congratulating him. 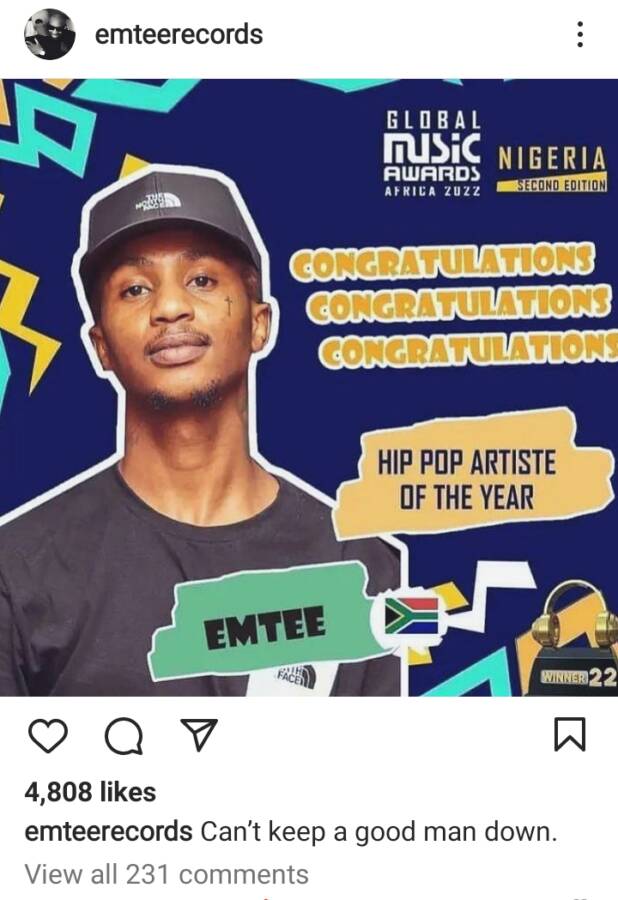 The Former Ambitiouz Entertainment star had reasons to call out the record label in the past, including the withholding of his awards.

There wouldn’t be a reason for a similar call-out this time, however. The songster is now an indie artist, signed to his own record label. And unlike before, there is no drama about what he wants to do and how he does it with his music.

By the way, the songster recently celebrated the first anniversary of one of his albums, “LOGAN.” The project was named after one of his sons. It’s almost a tradition with him to name projects after his kids.

Tags
Emtee
John Israel A Send an email 20 April 2022
Back to top button
Close
We use cookies on our website to give you the most relevant experience by remembering your preferences and repeat visits. By clicking “Accept All”, you consent to the use of ALL the cookies. However, you may visit "Cookie Settings" to provide a controlled consent.
Cookie SettingsAccept All
Manage Privacy