Controversial podcast host Rea Gopane has ridiculed Bonang for the R300k suit she instituted against him at the Johannesburg high court, describing the House of BNG boss as delusional.

While Bonang was celebrating her court win ad the fact that, by the judgment, she’s now entitled to R300k from Rea Gopane in damages as ruled by the court, the podcast host is unapologetic and even sarcastic.

In a recent video tweet, Rea Gopane noted that he’s been planning for such a scenario (him losing the case) from last year. And he’s made it clear that he isn’t giving Bonang a cent. In his video, which you can check out below, he was adamant she would get nothing.

by South African standards, R300k is no small sum, and many across Mzansi have been wondering how Rea Gopane, who’s obviously not a millionaire, was going to pay

When a fan indicated that R300k might be impossible for Rea Gopane to pay, Bonang had chimed that that next 30 years will be mad fun for the podcaster. In other words, he’s have the next 30 years to scrounge the R300k to pay her. 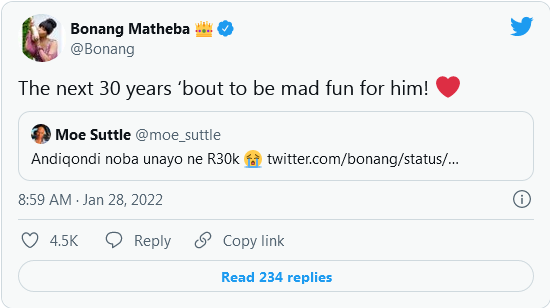 Well, it remains to be seen if Rea Gopane will continue to snub the court’s ruling. Would he be arrested and imprisoned for contempt of court?

Tags
Bonang Matheba Rea Gopane
John Israel A31 January 2022
Back to top button
Close
We use cookies on our website to give you the most relevant experience by remembering your preferences and repeat visits. By clicking “Accept All”, you consent to the use of ALL the cookies. However, you may visit "Cookie Settings" to provide a controlled consent.
Cookie SettingsAccept All
Manage Privacy