Mzansi producer Zoocci Coke Dope recently accused fellow musos of not knowing how to put albums together. He made that accusation in a tweet.

The highly opinionated Nota Baloyi was completely unimpressed by Zooci Coke Dope’s tweet and denounced him as a copycat producer.

He said Zoocci Coke Dope copies American producers’ beats and asked him when he would start creating and expanding his own sound. He also demanded to know when the producer will become original.

Looking into the past, he stated that Mabala Noise’s Makwa did some serious copying in the past but he roasted Makwa so much that the kasi rapper reformed. 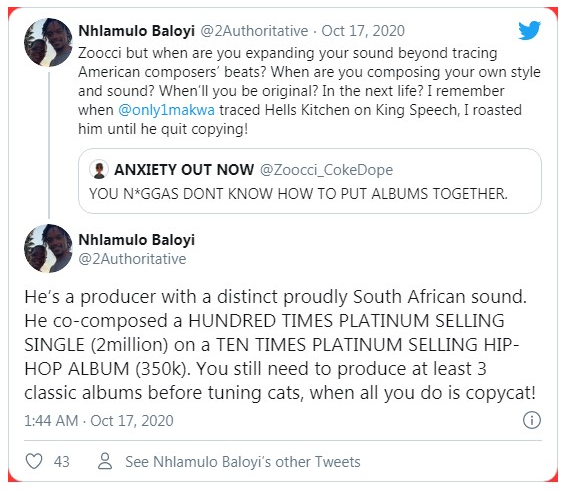 This isn’t the first conflict between the pair, and it is doubtful it will be the last. As a matter of fact, Zoocci Coke Dope had slammed Nota previously, accusing him of asking for respect he hasn’t earned. You can check out the backstory here.

By the way, because of his controversial takes on issues music, Nota has been in conflict with many musos, including Cassper Nyovest, Nasty C and AKA

Well, what do you think of Nota Baloyi’s claims Zoocci Coke Dope is a copycat producer? You might want to join the conversation by dropping your thoughts in the comment section below.

Tags
Lavida Nota Zoocci Coke Dope
John Israel A Send an email 21 October 2020
Back to top button
Close
We use cookies on our website to give you the most relevant experience by remembering your preferences and repeat visits. By clicking “Accept All”, you consent to the use of ALL the cookies. However, you may visit "Cookie Settings" to provide a controlled consent.
Cookie SettingsAccept All
Manage Privacy