NOTA has just challenged Kwesta to respond to rapper K.O’s “Omega Freestyle” tune, which is said to be a jab at Big Zulu.

“Omega Freestyle” has been the talk of Mzansi hip hop of recent, with many hailing it as a work well done. Even AKA had something positive to say about it.

However, NOTA believes Kwesta is the appropriate person to respond to K.O, and he urged to rapper to respond to the veteran based on what he (NOTA) taught him (Kwesta). You can check out the tweets below. 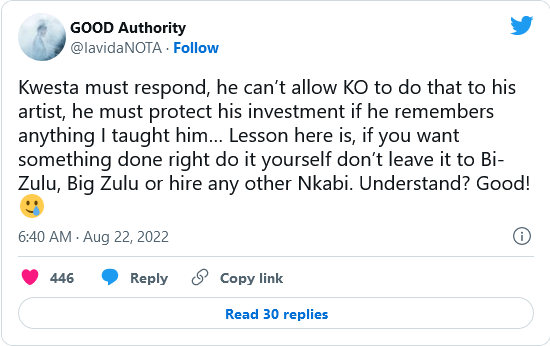 Big Zulu had released a song dubbed “150 Bars,” in which he dissed several big names in South African hip. However, toward the end of the song, he had apologised to those he dissed. K.O’s “Omega Freestyle” was in response to that song.

And now, with NOTA challenging Kwesta to drop a track in response to K.O’s scorcher, all eyes are on the muso to see what he would drop – if at all – and what impact it would make. NOTA is asking Kwesta to respond because he believes Big Zulu doesn’t have a strong comeback against K.O, a veteran and one of the most respected names in South African hip hop.

The question then is, will Kwesta take up the challenge?

Tags
Nota
John Israel A Send an email 23 August 2022
Back to top button
Close
We use cookies on our website to give you the most relevant experience by remembering your preferences and repeat visits. By clicking “Accept All”, you consent to the use of ALL the cookies. However, you may visit "Cookie Settings" to provide a controlled consent.
Cookie SettingsAccept All
Manage Privacy