South African music executive and culture critic Lavida Nota, who fancies himself The Authority, has shared his two cents on A-Reece scooping the Lyricist of the Year award at this year’s South African hip Hop Awards (SAHHA).

Hitherto a staunch critic of A-Reece’s musical style and more, Nota surprised some followers who he dropped something positive about The Boy Doing Things.

He noted that the category of the award was one that means the most and expressed his pleasure that A-Reece had won the award before. And again. Nota also expressed the wish the category will be retired and a vernacular songwriter award will be included among the SAHHA categories. 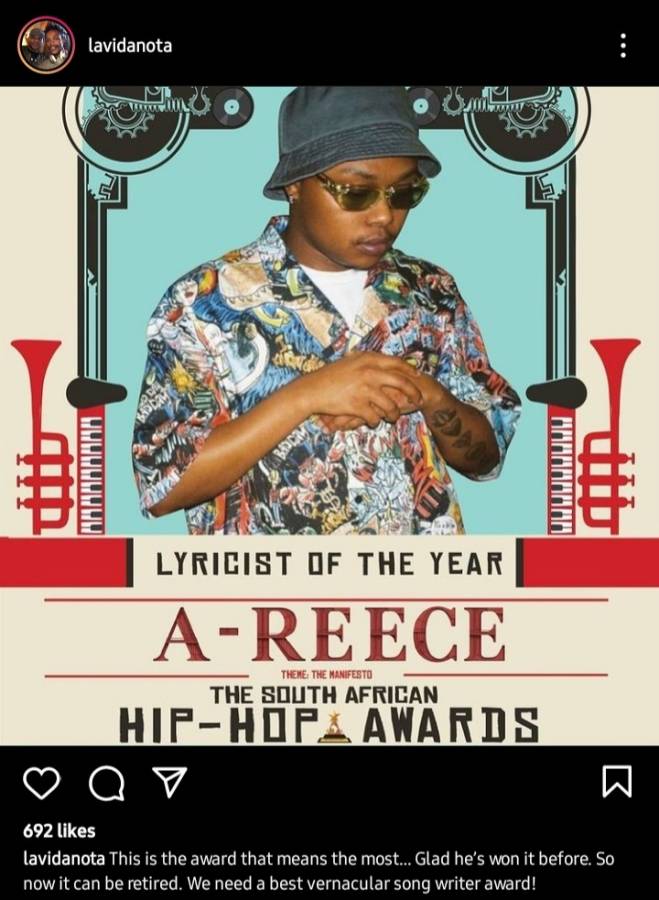 Known for always speaking his mind, Nota had angered many famous voices in South Africa’s music space, from Cassper Nyovest to Nasty C and Stogie T. And from the look of things, he isn’t done yet.

At some point, in the middle of his tiff with Cassper Nyovest, The Family Tree boss had dismissed Nota as a fraud.

Well, A-Reece, who’s just received Nota’s nod of the Lyricist of the Year win, is one key rap figure who has shown to go his way, doing things his way and only working with a select few in the industry.

Tags
A-Reece Nota
John Israel A Send an email 14 December 2021
Back to top button
Close
We use cookies on our website to give you the most relevant experience by remembering your preferences and repeat visits. By clicking “Accept All”, you consent to the use of ALL the cookies. However, you may visit "Cookie Settings" to provide a controlled consent.
Cookie SettingsAccept All
Manage Privacy