South Africa’s Sho Madjozi has accused Buna Boy of asking Stormzy’s team to take down the song “Own It (Remix).” The song, by Stormzy, had featured Burna Boy and Sho Madjozi, who are nominated in the same category of the BET Awards this year.

Sho  Madjozi claimed the song disappeared from platforms online after her nomination in the Best International Act category alongside Burna Boy. She insists the “African Giant” had asked Stormzy’s team to take down the song immediately because he thinks she’s a threat to him.

She went on a long Twitter rant, implying that Burna Boy was a bully. But she would not be discouraged or intimidated. You can read her rant in the screenshots below. 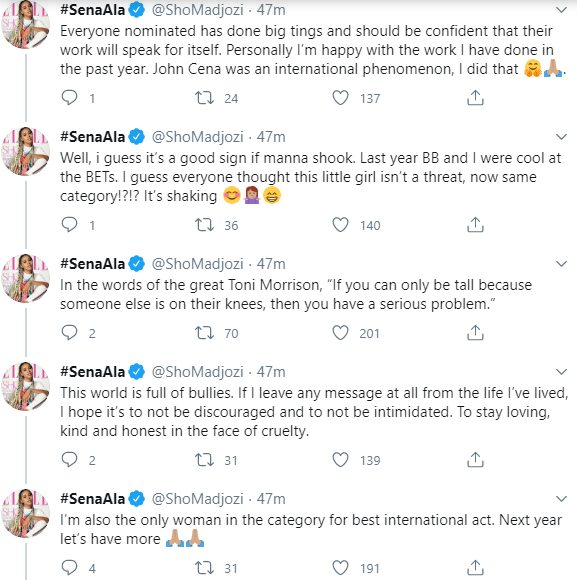 By the way, she did not just accuse Burna Boy of bullying by asking Stormzy’s team to take down the song, she provided what appears to be email evidence. You can view it below and determine for yourself.

On his part, Burna Boy dismissed her claims as untrue, claiming he had no hand in the alleged disappearance of the song online. He said perhaps the song wasn’t cleared by Atlantic records in the United States and might have been flagged. 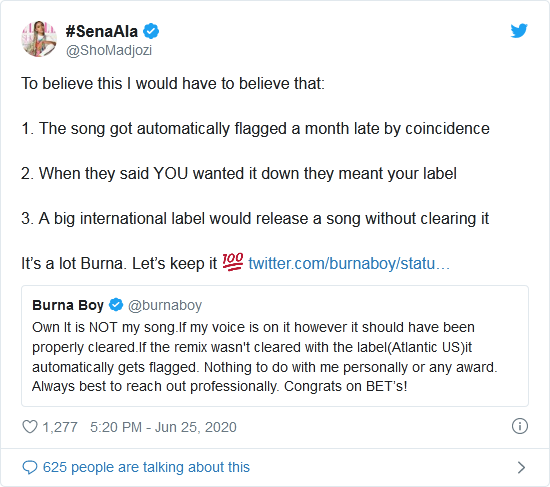 Sho Madjozi scoffed at this position. You can check out their arguments below and let us know what you think.

Tags
BET Award Burna Boy Sho Madjozi
John Israel A Send an email 26 June 2020
Back to top button
Close
We use cookies on our website to give you the most relevant experience by remembering your preferences and repeat visits. By clicking “Accept All”, you consent to the use of ALL the cookies. However, you may visit "Cookie Settings" to provide a controlled consent.
Cookie SettingsAccept All
Manage Privacy