He’s never hidden his love for the good life and good cars too. Master KG has just cemented his love for all things good by snapping another luxurious whip.

The songster recently turned 26. Although he didn’t buy a car the day of his birthday, he made it a point to buy one within that period.

Taking to his Instagram Story, he’d shared a picture of him standing next to a covered Porsche at a dealership. For a caption, he noted it’s still his birthday, so why not? 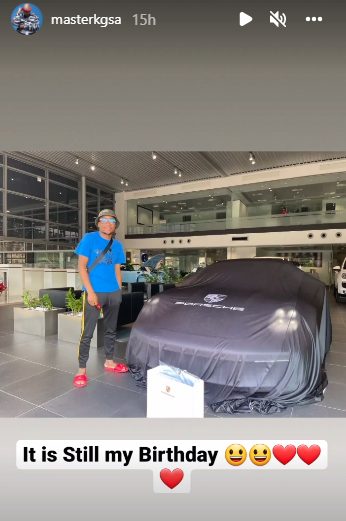 With the car covered, the model cannot be given. But trust Master KG to always go for high-end vehicles. Already, his garage glitters with several vehicles, including a Ferrari and a Mercedes Benz.

The purchase of the car adds to the list of wins these past few months. The songster had recently gotten back with his ex-girlfriend Makhadzi and even taken her to his mother. The two have also worked on a song together and it was a hit with the public.

Master KG has been on the music scene for years, but it wasn’t until he released the song “Jerusalema” in collaboration with Nomcebo that he achieved international fame and swelled his bank account massively.

Tags
Master KG
John Israel A Send an email 10 February 2022
Back to top button
Close
We use cookies on our website to give you the most relevant experience by remembering your preferences and repeat visits. By clicking “Accept All”, you consent to the use of ALL the cookies. However, you may visit "Cookie Settings" to provide a controlled consent.
Cookie SettingsAccept All
Manage Privacy