Anything for the girls? Yes, says Mzansi producer Prince Kaybee, announcing his plans to feature 10 of his female fans on a new album.

Prince Kaybee did a mini talent hunt with the hashtag #ProjectHope and discovered several fine voices. He has selected 10 winners – all females – who were outstanding in their singing and will feature them all.

He said he had to select 10 because he noticed there were many talents and he wants to give as many of them a platform as possible. According to the “Gugulethu” hitmaker, he will produce the songs himself and make them available on all digital platforms and the singers will have a cut from the song sales. He also said the winners will get amazing prizes after the recording. 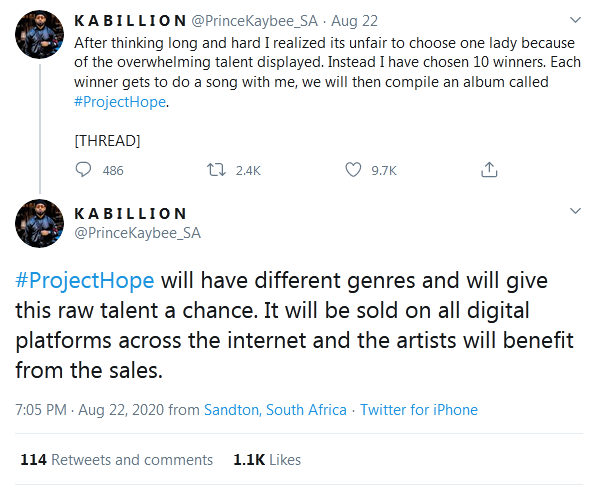 If you are curious about the winning 10 singers and their songs, you may want to listen to some of them below.

By the way, following the announcement of the winners, Prince Kaybee stated he would be going on tour in East London. He didn’t give the date.

Anyway, fans are already looking forward to the compilation featuring the 10 new voices. Some of them just might become household names following the release of the body of work.