Music curator Rashid Kay has fired a shot at Family Tree rapper Cassper Nyovest who recently claimed that hip hop has too much politics.

In a tweet on April 18, Cassper Nyovest had stated that the reason he loves amapiano is that the genre has no gatekeepers. The song an artiste releases is either hot or it is not.

Unimpressed by Cassper Nyovest’s claims, Rashid Kay had, without mentioning names, asked Mufasa not to use the excuse hip hop has too much politics when he wants to switch to amapiano. He urged the “Amademoni” star to mention when hip hop had no politics

Rashid Kay Insists that gatekeeping in South African hip hop is a myth. You can check out the tweets below. 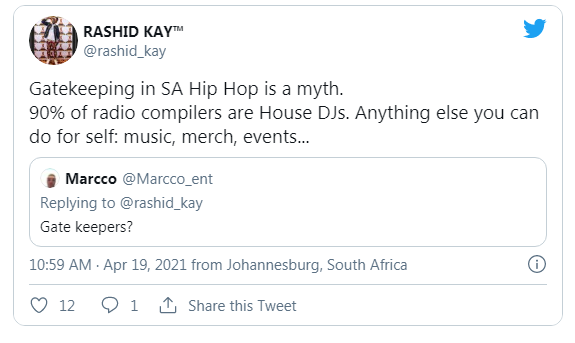 By the way, Cassper Nyovest is gearing to release an amapiano album. He has not given the date of release, but he assures fans of the genre that what he’s working on is unique and will ignite the industry.

Fans have expressed excitement of the planned. It wouldn’t be Cassper Nyovest’s first foray into the world of amapiano, though. He has released amapiano nnmbers previously, notably in collaboration with DJ Sumbody.

Can you guess what his amapiano album would be like?