The nominations for this year’s SAMA (South Africa Music Awards) might go down as one of the most controversial in history. The complaints, about deserving artistes not making the nominees’ list, are many.

Apparently the “Uzobuya” singer DJ Zinhle is one of those whose appearance on the list has elicited controversy. Some music watchers are of the view Master KG ought to have been nominated in her stead.

According to a Twitter user who goes by the handle @IamJess30143464, DJ Zinhle was undeserving of the nomination because Master KG literally ruled the airwaves in South Africa with “Jerusalema,” a song featuring Nomcebo, and ought to have been nominated instead.

In response, DJ Zinhle left no one in doubt she was indifferent to her nomination. Awards don’t define her, she said. And if there was a way she could pass her nomination to someone else, then she would do it.

She advised @IamJess30143464 to learn to fight for her faves without accusing others of things she knows nothing about. Those words apparently ended the conversation between them. 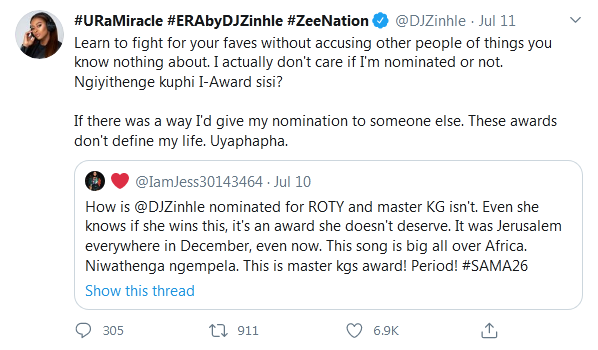 Well, do you think DJ Zinhle is undeserving of the SAMA nomination? You might wish to join the conversation by dropping your thoughts in the comment section below.