After a brief hiatus, Kiernan  “AKA” Forbes returned to the music scene with a new single titled “Lemons” (Lemonade). The number is more like an introduction to an imminent project dubbed “Mass Country.”

The reactions to the jam have been pretty mixed, with many of Aka’s fans praising it as a great track. Some think the track is no good, however. A mixed bag, apparently.

Among those who have reacted positively to the song so far is local entrepreneur Sizwe Dhlomo. In a recent tweet, he called the number the greatest from AKA so far. You can check out the tweet below. 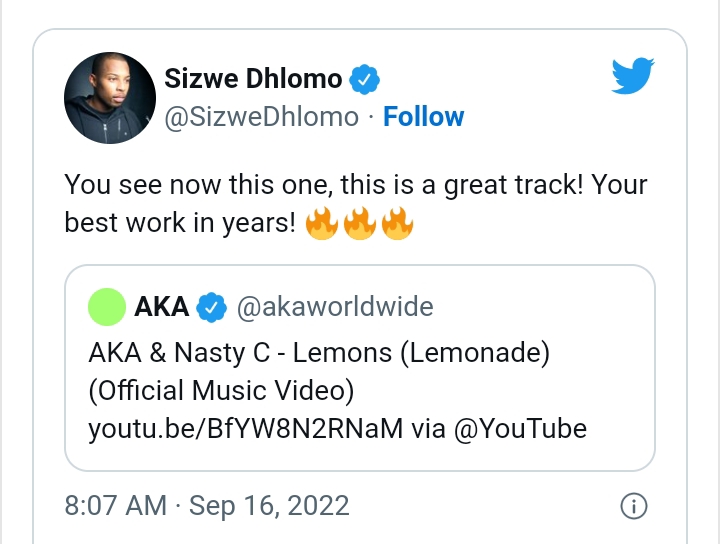 In contrast, music executive and culture critic Lavida NOTA described the song as trash and AKA’s worst track to date. The song has created what he called the “lowest moment” among the Megacy (as AKA’s fans are known. Below is his tweet.

Absolute, complete & utter rubbish… As a member of the Megacy this is our lowest moment ever. Not even @ChrisExcel102 likes this trash! https://t.co/gGkFgoK3zT

NOTA is a fierce critic of AKA, so perhaps his take on the musician’s song shouldn’t be surprising at all. Also, the Supa Mega isn’t the only one who has come under NOTA’s missile.

At any rate, AKA is confident in the number he has created and is gearing up to release a new album for the Megacy.

Tags
Nota Sizwe Dhlomo
John Israel A Send an email 17 September 2022
Back to top button
Close
We use cookies on our website to give you the most relevant experience by remembering your preferences and repeat visits. By clicking “Accept All”, you consent to the use of ALL the cookies. However, you may visit "Cookie Settings" to provide a controlled consent.
Cookie SettingsAccept All
Manage Privacy