Idols SA judge Somizi Mhlongo has finally spoken out after leaving his legal team to address the series of allegations leveled against him by his estranged husband Mohale Motaung.

Among others, Mohale had accused the media personality of having threatened him with a knife at some point, and even of frustrating his plans of working with the Fergusons (Connie and the late Shona).

At the outset, Somizi had let his lawyers do the defending. But the public wasn’t impressed with his silence. And with the storm of criticisms increasing, Somizi decided to speak out for himself.

In a statement posted to Instagram a day ago, he said that never in his wildest imagination did he know that he would one day have to defend his honour as a result of someone he had loved deeply and unconditionally.

He dismissed Mohale’s allegations as false and defamatory. While admitting their relationship had its us and down, he stated that he’s NEVER been emotionally, physically or knowingly been abusive towards Mohale.

He clarified that he’d never made any conscious effort to sabotage Mohale’s personality growth of hid=s drive to become financially independent. He said it is particularly painful that Mohale’s allegations have the potential to dry his sources of income (which depend mostly on his reputation). 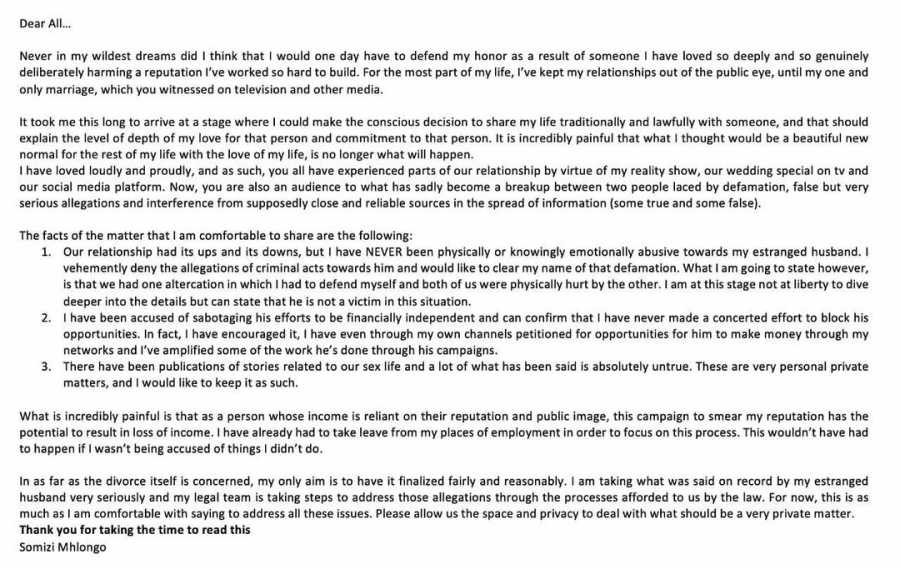