During a live performance at DJ Shimza’s One-man Show, with Shimza on stage, Somizi “mistakenly” threw his jacket, which was filled with cash, at the crowd.

The crowd went wild, realizing what the controversial author, reality show judge and singer had done. It is one of its kind. Coming during a pandemic, when many are out of jobs and out of hope, some fans think he couldn’t have made such a “mistake” at a better time.

It’s apparently the first time Somizi, who recently vacationed with bestie Vusi Nova, had done this. You can check out the video below. 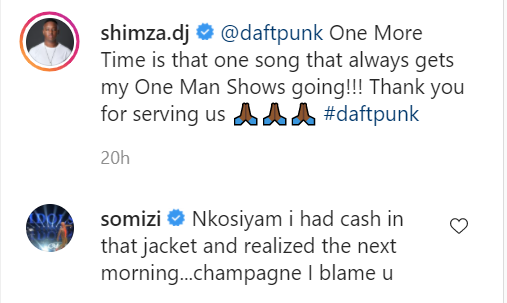 The two artistes fall in the league of entertainers who are actively helping one another’s hustle.

What do you think of Somizi throwing his jacket into the crowd? Would you have made a similar “mistake”? You may want to join the conversation by dropping your thoughts in the comment section below.

Tags
Somizi
John Israel A23 February 2021
Back to top button
Close
We use cookies on our website to give you the most relevant experience by remembering your preferences and repeat visits. By clicking “Accept All”, you consent to the use of ALL the cookies. However, you may visit "Cookie Settings" to provide a controlled consent.
Cookie SettingsAccept All
Manage Privacy