It was an emotional moment for South Africans as they listen to veteran presenter Noxolo Grootboom for the last time. Grootboom had spent 37 years as a presenter for SABC.

In the years she spent at the station, she developed a massive following of dedicated listeners. So when it emerged that she would be retiring after over three decades on the beat, many were emotional, even teary.

Grootboom’s appeal transcends the populace, though. The South African government is apparently aware of her meritorious service and honoured her before her farewell bulletin.

President Cyril Ramaphosa was to address the nation at 7pm. But he deferred his broadcast until thirty minutes later so that the Rainbow Nation could tune in and listen to Grootboom for the last time. 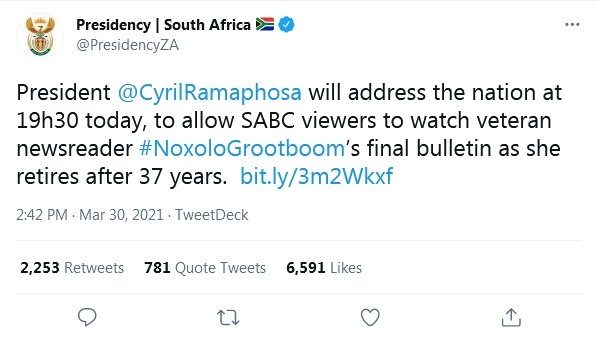 When the retiring broadcaster learned of the president’s act honouring her, she was speechless, emotional. The moment was captured and shared on Twitter. You can check it out below.

This is how #MamNoxoloGrootboom reacted to the news that @PresidencyZA @CyrilRamaphosa has moved his national address to ‘to allow SABC viewers to watch veteran newsreader Noxolo Grootboom’s final bulletin as she retires after 37 years’ pic.twitter.com/2YYJT46BuB

President Ramaphosa was commended for his gesture by his compatriots.

In case you’re not conversant wih Grootboom previously, you may want to check out some of her broadcast appearances below and join the conversation by dropping your thoughts in the comment section. Way to go, peeps!

Tags
Noxolo Grootboom
John Israel A Send an email 31 March 2021
Back to top button
Close
We use cookies on our website to give you the most relevant experience by remembering your preferences and repeat visits. By clicking “Accept All”, you consent to the use of ALL the cookies. However, you may visit "Cookie Settings" to provide a controlled consent.
Cookie SettingsAccept All
Manage Privacy