Recently, social media has been flooded with reactions to Stogie T and Nota Baloyi’s altercation. Several videos of Nota being carried out of the premises hit the net and Mzansi has had so much to say.

Baloyi has since shared several tweets accusing Stogie of being a woman beater, and claimed that he was defending a female friend who the rapper assaulted. Stogie T has now finally released a statement opening up about the altercation. He opened up saying that he has the right to express his feeling.

According to him, Baloyi has lied severally about their encounters. He went on to claim that he has accused him of destroying the culture, and suggested that his mother was a corrupt public servant, claiming that she cheated the state. He further extended his apologies to his wife, family, church, and the Hip Hop community. 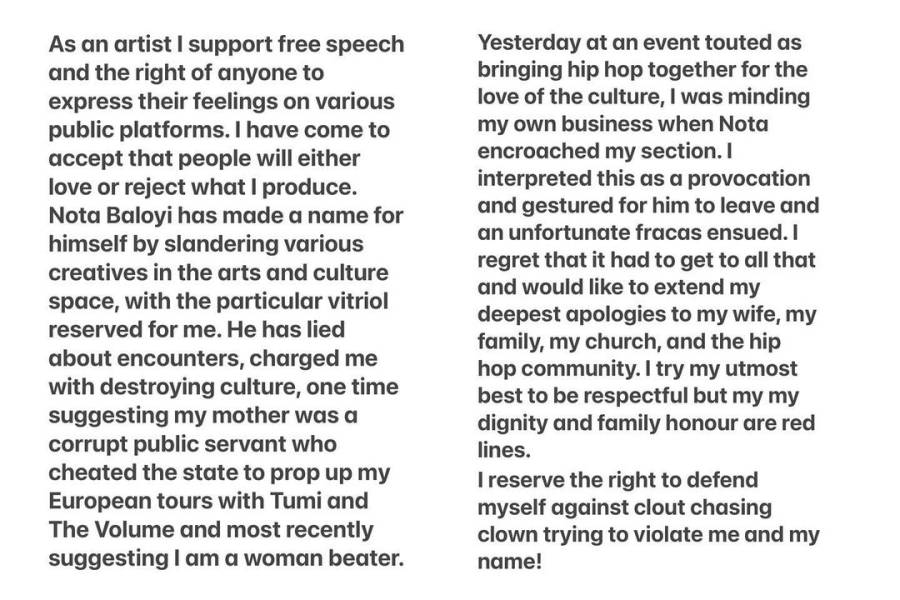 Tags
Nota Stogie T
John Jabulani Send an email 5 October 2021
Back to top button
Close
We use cookies on our website to give you the most relevant experience by remembering your preferences and repeat visits. By clicking “Accept All”, you consent to the use of ALL the cookies. However, you may visit "Cookie Settings" to provide a controlled consent.
Cookie SettingsAccept All
Manage Privacy