Cassper Nyovest’s baby mam tThobeka Majozi has been silent for a while. And because she hasn’t been speaking and showing up as usual, several peeps have insinuated that her relationship with the Family Tree boss was strained.

Well, about her silence, Thoibeka Majozi herself has spoken up, and what some peeps have in mind is not exactly the reason she elected to keep to herself.

For those who may have been worried about her, Thobeka has got an answer to their worries and why she was off social media for weeks. In a post to Instagram, which showed her having her face done, the mother of one indicated she’d gone offline since the last day of 2021.

She had been fasting since. Taking a break from social media was to make her focus on her spiritual communion and walk into the New Year prepared. Now, she’s stepping into the New Year, spiritually, mentally, and financially revived. 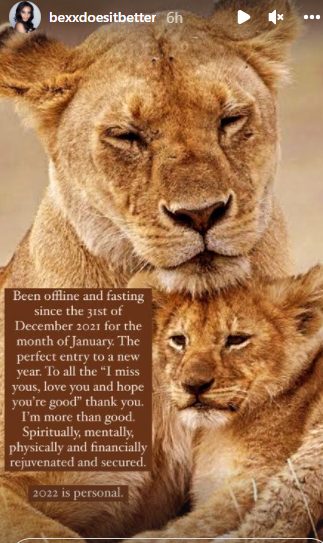 By the way, around the period when she disappeared from social media, some peeps had claimed that the footballer Andile Mpisane was in a secret relationship with her and might be the father of her son Khotso, a claim Cassper dismissed. Well, welcome back, Thobeka

Tags
Thobeka Majozi
John Israel A Send an email 2 February 2022
Back to top button
Close
We use cookies on our website to give you the most relevant experience by remembering your preferences and repeat visits. By clicking “Accept All”, you consent to the use of ALL the cookies. However, you may visit "Cookie Settings" to provide a controlled consent.
Cookie SettingsAccept All
Manage Privacy