The social media war continues for Nigerian actress Tonto Dikeh as she dismisses the dancer Jane Mina as an adulterous twerker.

It all started after Jane Mena, an influencer, shared a cryptic message in which she noted that a certain person (apparently Tonto) threatened to go to court but chickened out along the way. He also noted that is “sapa.”

In Nigeria slang, “sapa” is used to describe astate of extreme poverty, especially after a period of extravagant spending. 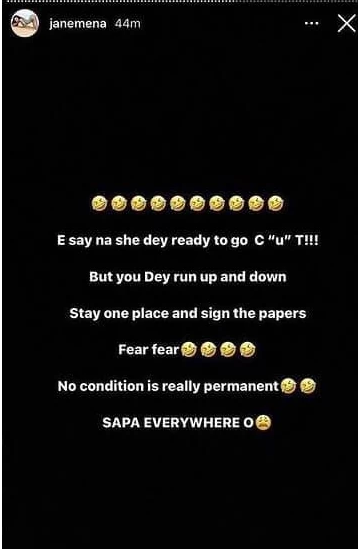 Tonto had apparently seen the post and fired her own shot. In a post to her Instagram Story, she had dismissed Jane Mena as an adulterous twerker, noting that someone had slept with Jane more than Jane’s husband.

To affirm her claim, she shared a voice note, urging Jane not to fight her but her “licking mouth” lover, who had revealed their escapades.

She also noted that she had not chickened out as Jane claimed in her post, and dieting Jane and her lawyer to Festus Keyamo, another lawyer. You can check out her post below. 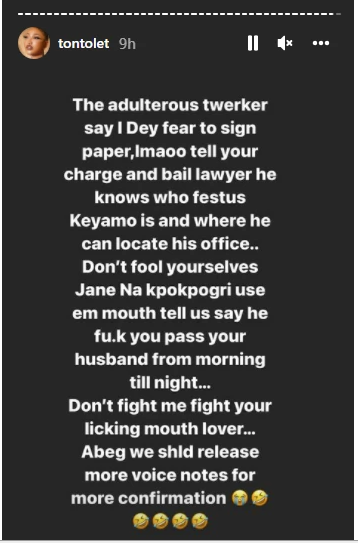 At the rate the two are slashing into each other, Nigerians may have enough drama and entertainment this festive season from the orbit of the warring duo. Stay tunes.

Tags
Jane Mena Nigeria Tonto Dikeh
John Israel A Send an email 18 December 2021
Back to top button
Close
We use cookies on our website to give you the most relevant experience by remembering your preferences and repeat visits. By clicking “Accept All”, you consent to the use of ALL the cookies. However, you may visit "Cookie Settings" to provide a controlled consent.
Cookie SettingsAccept All
Manage Privacy