The coronavirus pandemic may have slowed the world, but South African musician Tresor is still in “Motion.” Care for the evidence? Come along, then.

A few hours ago today 23 June 2o20, the songster announced a new album entitled “Motion” will go on pre-order and pre-save on streaming platforms this Friday. Also, this week, a new song titled “Zwakala” will be released to fans.

The song is supposedly part of the imminent album. The details end there. The muso gave no specific dates. But then fans are already alert for the song as well as the album. Given Tresor’s musical appeal, perhaps the rising expectations among fans should surprise no one.

Tresor has a rich history, both as a singer and as a guest on the works of other artistes. He recently featured on Black Motion’s “Bloodstream,” as well as announced the music video for his single “Thrill.”

Well, we are in “Motion” with Tresor and can’t wait to bring you the album and the single “Zwaka” when they drop. Stay tuned for updates. What’s coming is pretty interesting. 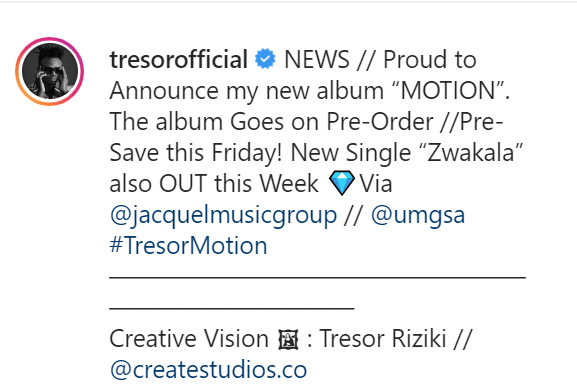 What are your expectations about the upcoming single? We invite you to join the conversation by dropping your thoughts in the comment section below.