Focalistic and DBN Gogo have been of great public interest recently not because of a song they put out but because it was recently revealed they are dating.

DBN Gogo had shared a clip showing the gift she got from the “Ke Star” hitmaker and revealed they were dating. Fans didn’t see it coming, so they were understandably shocked.

And now more evidence has emerged, showing they have been dating longer than most people assume. Twitter sleuths had gone a-digging and they came up with a clip DBN Gogo had shared as far back as 2018.

In the caption to the clip, the singer had called Focalistic “Space wami” and used a red heart emoji. She had also expressed her wish to see him at the top of his game in the coming years. The wish has since come to pass. 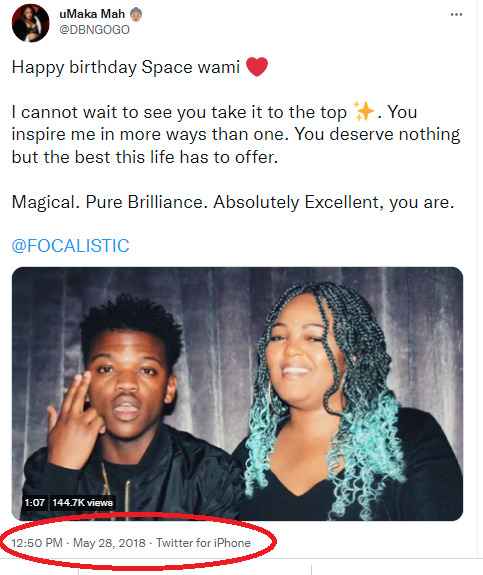 fans of the duo were in the comments to applaud how far they have come in their relationship without the publicity and the drama. A fan had joked that the two are in a “secret relationship.”

Anyway, it would be interesting to see how the two navigate the relationship thing now that the public is aware of it. Stay tuned, y’all.

Tags
DBN Gogo Focalistic
John Israel A18 February 2022
Back to top button
Close
We use cookies on our website to give you the most relevant experience by remembering your preferences and repeat visits. By clicking “Accept All”, you consent to the use of ALL the cookies. However, you may visit "Cookie Settings" to provide a controlled consent.
Cookie SettingsAccept All
Manage Privacy