Businesswoman Shauwn Mkhize’s style of helping embattled kwaito musician Zola 7 has provoked condemnations from some quarters in South Africa, with the likes of NOTA and Ntsiki Mazwai faulting the businesswoman.

In case you missed it, there’s been great worry across South Africa over Zola 7’s health and financial standing, with some claiming that not only is he suffering from epilepsy Zola 7 confirms this) but that he’s also in serious financial difficulties.

Shauwn Mkhize had decided to step in to help, sharing on Instagram a clip that appeared to show the respected kwaito veteran groveling to her. This provoked outrage across social media.

As far as some tweets were concerned, Shauwn is nothing more than a clout chaser who’s using Zola 7’s travails for clout.

Commenting on the issue, music executive NOTA had described Shauwn as a fraud, noting she should have used her money to send Kamo Mphela to the United States and not her talented son Andile.

NOTA described Zola 7 as a legend and faulted that people see nothing wrong in him groveling before Shauwn because she’s wealthy. You can check out the tweets below. 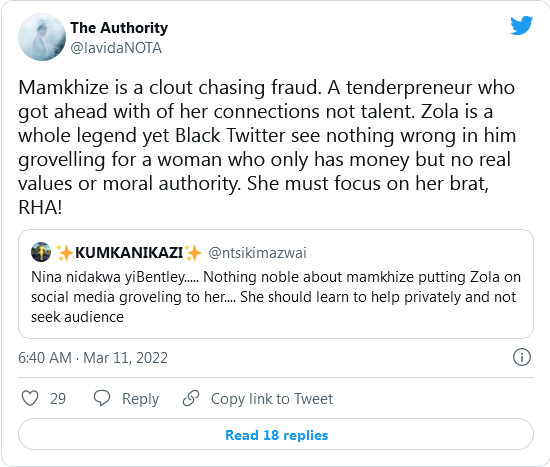 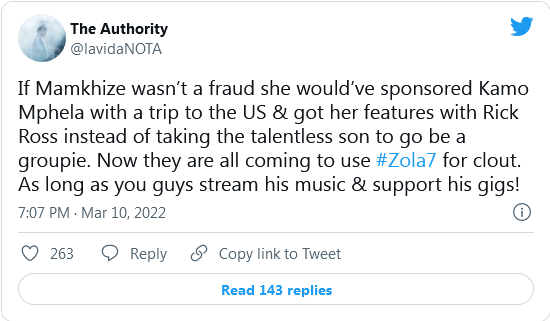 While some have faulted Shauwn’s style of helping, others have hailed her for deciding to help Zola 7 in his time of need.

Tags
Shauwn Mkhize Zola 7
John Israel A Send an email 12 March 2022
Back to top button
Close
We use cookies on our website to give you the most relevant experience by remembering your preferences and repeat visits. By clicking “Accept All”, you consent to the use of ALL the cookies. However, you may visit "Cookie Settings" to provide a controlled consent.
Cookie SettingsAccept All
Manage Privacy