Celebrated actress and media personality Pearl Thusi may not get involved in the advocacy to raise funds for kwaito veteran Zola 7, citing the allegations of gender-based violence against the muso.

Her refusal to support Zola 7 has caused her to trend on Mzansi Twitter, with many on the space sharing their thoughts on what it means for the culture.

Zola 7 is currently facing health and financial issues and the public has been rallying to help him. The songster is said to be suffering from epilepsy and it has hindered his growth as a musician.

The public is convinced he’s suffering and is therefore determined to help him.

A celebrated Photoshop artist had lashed out at celebs who are quiet amid Zola 7’s suffering they would be too quick to celebrate him after his death but would not help him now he’s facing some financial troubles.

Pearl Thusi may not be averse to joining the advocacy to raise funds for the kwaito ace, but in a tweet, she cited the GBV allegations against Zola 7 as the reason she, as well as other celebs, might not help. 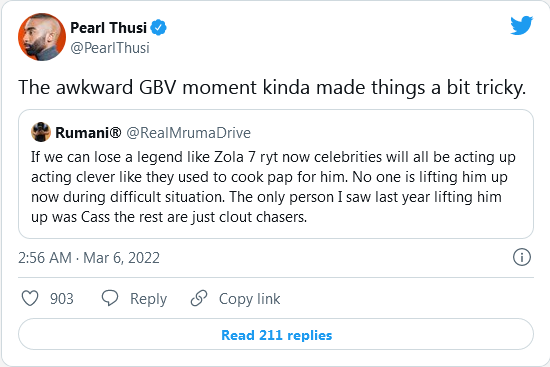 Zola 7 had allegedly beaten up his wife at some point. The case remains a subject of sporadic debate.

Tags
Pearl Thusi Zola 7
John Israel A Send an email 8 March 2022
Back to top button
Close
We use cookies on our website to give you the most relevant experience by remembering your preferences and repeat visits. By clicking “Accept All”, you consent to the use of ALL the cookies. However, you may visit "Cookie Settings" to provide a controlled consent.
Cookie SettingsAccept All
Manage Privacy