To give fans an idea of what’s imminent, as well as the idea behind the creation of the song, the songstress had taken to Instagram and shared the cover art of the imminent song. In the caption to the post, she had tagged the guests on the song.

According to “Wuz Dat” rapper, it was an avenue for her industry friends to rep their area codes. In other words, for this song, you have musicians from PTA, Pheli, Gabs City, Maftown, and Potch spitting their bars.

On when fans should expect the song, Boity said this Friday – 4 June so to speak. That’s exactly three days from now. 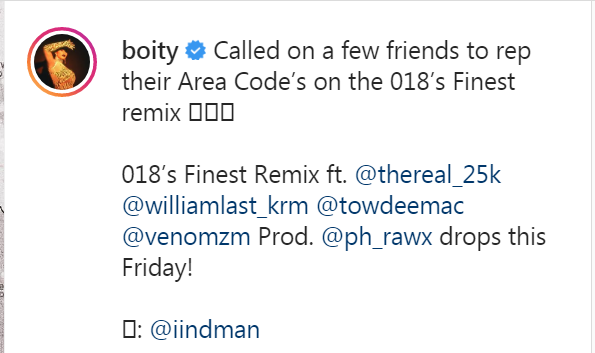 Well, no qualms. If you don’t want to miss the song on release, you may want to follow our social media channels as well as subscribe to our news feed and stay tuned for updates. We’re going to share the song here as soon as it s released.

By the way, Boity is one of the rappers nominated for this year’s SAMAs (South African Music Awards). Her album “4436” had earned her the nomination.