Before he released his “Nakupenda“music video, South African disc jockey and producer DJ Sbu had expressed a wish of reaching one million views before 2021.

Well, the songster didn’t have to wait until 2021 for his dreams to be fulfilled. “Nakupenda” music video reached a milestone of one million views in under 24 hours. Not only that, it is also trending at N0. 2 on YouTube, according to DJ Sbu. 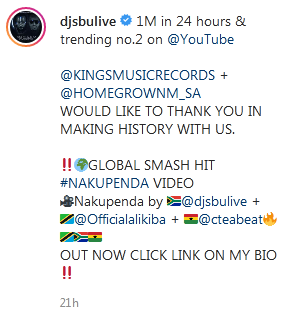 By the way, “Nakupenda” reaching one million views in less than 24 hours is nothing surprising given the calibre of the artistes behind the music video and the quality of the shooting.

DJ Sbu is one of South Africa’s most respected DJs. Besides music, he is also a notable entrepreneur with hands in several ventures. He is especially noted as he brains behind the MoFaya  brand of energy drinks.

Alikiba – also called Ali Kiba or King Kiba – is a celebrated figure in bongo flava music. Right now, he might be counted among the top ten musicians in Tanzania and among the top fifteen from East Africa.

What do you make of “Nakupenda” music video reaching one million views in under 24 hours you might want to join the conversation by dropping your thoughts in the comment section below.

Tags
Alikiba DJ Sbu
John Israel A Send an email 30 December 2020
Back to top button
Close
We use cookies on our website to give you the most relevant experience by remembering your preferences and repeat visits. By clicking “Accept All”, you consent to the use of ALL the cookies. However, you may visit "Cookie Settings" to provide a controlled consent.
Cookie SettingsAccept All
Manage Privacy