It looks like Mzansi’s Emtee and Flvme are back in amity and are set to drop a collaborative single soon.

The two artistes were known to have a beef and rarely spoke of and about each other. But that’s set to change now as peace has returned to the kingdom. The triumph is the pairs’ and the fans’ too.

For one, the fans get to hear the two together – a beautiful combination, each being a fine artiste in his own right and celebrated, too.

Emtee and Flvme had a beef following Flvme’s statement in 2018 that Emtee was cruising in someone’s Mercedes Benz and even had a tattoo of the Mercedes Benz logo on his neck like he owned the priced ride.

In June this year, Emtee had said Flvme was right about him not owning a Mercedes Benz. He added that he had forgiven Flvme and asked fans to guide him on how to remove the Mercedes Benz logo on his neck.

In a tweet on 4 July 2020, Emtee made it clear he and Flvme are cool now. He gave no clue how they made peace after years of fighting. He was definite about the peace deal, dropping a laughing to indicate his light mood. 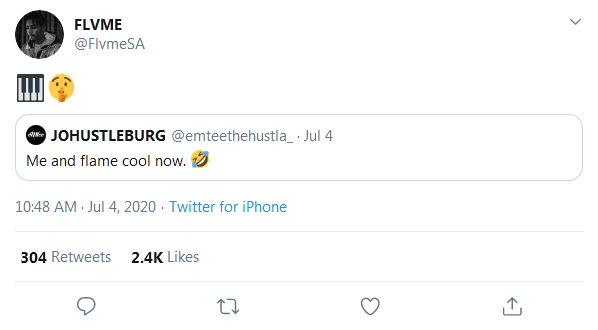 Flvme shared the tweet with piano keys emoji, indicating the two of them might have a song in the pipeline.

Tags
Emtee Flvme
John Israel A Send an email 6 July 2020
Back to top button
Close
We use cookies on our website to give you the most relevant experience by remembering your preferences and repeat visits. By clicking “Accept All”, you consent to the use of ALL the cookies. However, you may visit "Cookie Settings" to provide a controlled consent.
Cookie SettingsAccept All
Manage Privacy