It’s no longer news that Thuli Phongolo is no longer part of the series The Wife. But why she exited the Showmax flick, in which she played a character called Lerato, is what some fans have been unable to determine.

And because Thuli didn’t say anything at the outset, several opinions had formed around her exit. The media commentator Phil Mphela noted in a tweet that the production team decided to let Thuli go because she was missing in action.

Nomfundo Zondi, a spokesperson for Stained Glass, which is part of the production, noted that Thuli’s exit was mutually agreed upon. The production decided to terminate her character due to schedule issues, she claimed.

Thuli Phongolo reached a similar verdict in a statement she shared on her Instagram Story, however. She admitted having had a good time as part of the cast of the telenovela.

That notwithstanding, she still supports the telenovela and the cast. You can check out her statement below. 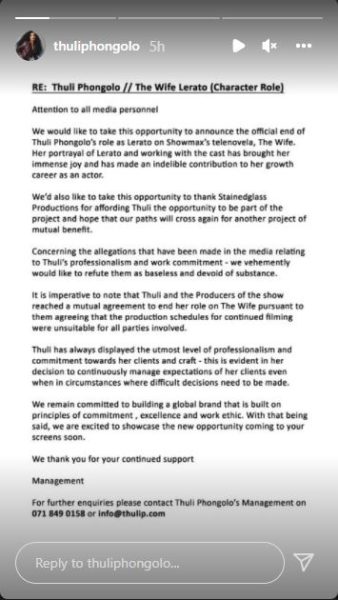 By the way, Thuli Phongolo recently promised she would give herself her dream life this year.

Tags
Thuli Phongolo
John Israel A Send an email 15 January 2022
Back to top button
Close
We use cookies on our website to give you the most relevant experience by remembering your preferences and repeat visits. By clicking “Accept All”, you consent to the use of ALL the cookies. However, you may visit "Cookie Settings" to provide a controlled consent.
Cookie SettingsAccept All
Manage Privacy