Cassper Nyovest’s “Any Moment Now (AMN)”  is probably the most anticipated album in South Africa right now. It apparently holds much meaning for Mufasa as it does for his fans and of course the musician Langa Mavuso…

For Mufasa, the album is especially significant in that it will herald the birth of his son – already named “Simba” (“Lion” in Swahili) by fans. The child’s mother is Thobeka Majozi.

For Langa Mavuso it holds a special meaning in that he would feature in one of the tracks. The track has already been recorded. The songster is impressed by his own performance, declaiming outright that he had never sung that way in his life before.

Apparently he is not the only one impressed. Family Tree boss Cassper Nyovest (Mufasa), with whom Langa Mavuso worked in the studio, was thrilled and applauded Langa’s musical merit. See the screenshots below. 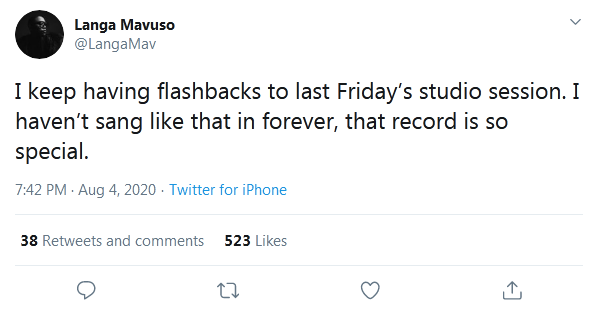 “Any Minute Now (AMN)” by Cassper Nyovest is scheduled for release September 11. We are watching that date and will share the album with you as soon as it is released. Subscribe to our newsfeed and keep a date with us, people.

September is close by. Something grand is on the way. Stay tuned for updates.