South Africa’s two-man band MFR Souls has expressed excitement over the success of the music video of their song “Amanikiniki.” The song features the brother band Major League, Kamo Mphela, and Bontle Smith.

In an Instagram post yesterday 5 October 2020, the group described the as the biggest amapiano jam in South Africa, and informed fans that it has reached 3 million views on YouTube two months after it was released.

The group gave a shout out to the guests on the song as well as the producer of the music video. “Amanikiniki” is apparently a fine amapiano number, so one should not be surprised at its success. 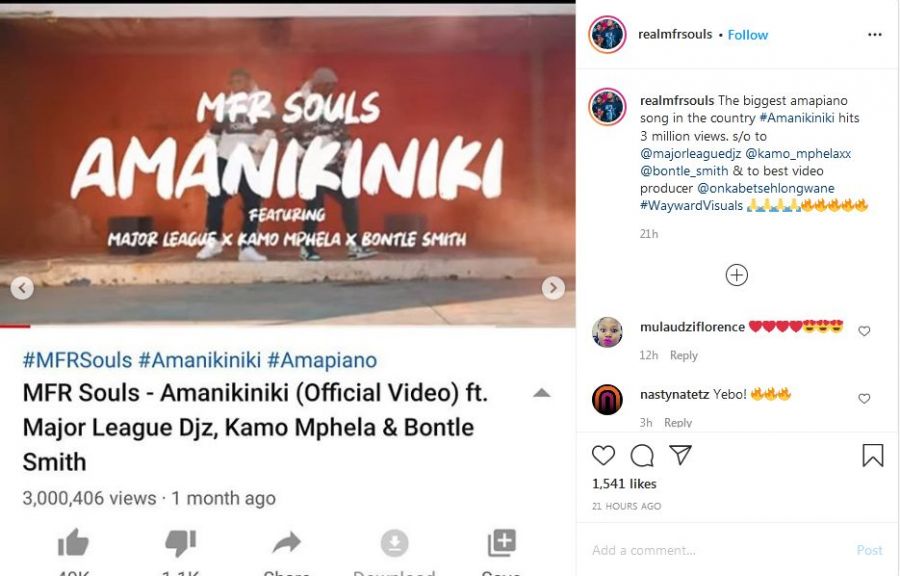 By the way, MFR Souls recently changed the title of their EP from“Music Is King” to “Musical Kings”. It was alleged that the group was pressurized to change the project’s title due to pressure from celebrated South African disc jockey and producer black Coffee who had a work of similar title. But neither the group nor Black Coffee has confirmed or denied this.

Do you think “Amanikiniki” is the biggest amapiano song as MFR Souls has claimed? If you haven’t watched it previously, you might want to check it out below and join the conversation by dropping your thoughts in the comment section.

Tags
Bontle Smith Kamo Mphela Major League DJz MFR Souls
John Israel A6 October 2020
Back to top button
Close
We use cookies on our website to give you the most relevant experience by remembering your preferences and repeat visits. By clicking “Accept All”, you consent to the use of ALL the cookies. However, you may visit "Cookie Settings" to provide a controlled consent.
Cookie SettingsAccept All
Manage Privacy