The “Empire Of Sheep” lyricist announced the end of the partnership in a recent Instagram post. In the post, he had thanked the Slikour boss Siya and his team for hosting and helping develop the initiative.

Specifically, he had stated that Verse of the Month and Verse of the Year will no longer be on Slikour, implying he might be taking the initiative to another platform. But he gave no details about this. 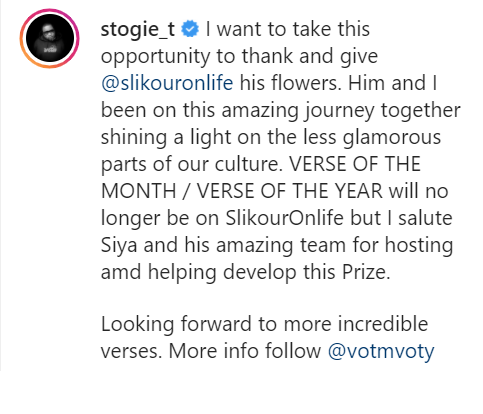 By the way, Slikour is yet to say anything about the discontinuation of the Verse of the Month and Verse of the Year partnership with Stogie T.

Anyway, we’re following events keenly and will bring you new details as they drop. In the interim, you might want to subscribe to our newsfeed as well as follow our social media channels and stay tuned for updates.

Well, what do you think of the ending of the Verse of the Month and Verse of the Year partnership with Slikour? You might want to join the conversation by dropping your thoughts in the comment section below.

Tags
Slikour Stogie T
John Israel A Send an email 5 February 2021
Back to top button
Close
We use cookies on our website to give you the most relevant experience by remembering your preferences and repeat visits. By clicking “Accept All”, you consent to the use of ALL the cookies. However, you may visit "Cookie Settings" to provide a controlled consent.
Cookie SettingsAccept All
Manage Privacy