Simmy is the songstress of the moment, thanks to the massive appeal of her latest project, “Tugela Fairy (Made Of Stars).” This body of work premiered on Apple Music and other digital platforms on 6 November 2020.

This year makes it exactly two years single her first project. And somehow, Simmy manages to memorializes her first compilation with another. Two years ago, in 2018, as a member of Sun-El Musicians’s El World Music record label, Simmy had released her “Tugela Fairy” album

This pop compilation, which housed twelve tracks in all, beginning with an intro titled “Kwa-Zulu” and ending with an outro titled “Ngiyavuma,” was intensely anticipated and rapturously received.

With that body of work the singer not only snapped the attention of the listening public, she advertised herself as one of the voices to look out for in South African music.

It may have been two years since that compilation, but time has in no way made her musically rusty. On the contrary, she yet retains her magical voice. She unleashed that voice so beautifully in her latest project that it is hard not to be wowed.

Unlike the previous compilation, Simmy’s  “Tugela Fairy (Made Of Stars)” is much richer in tracklist and in the breadth of its message. With this compilation, observant fans of the singer can see the massively creative leaps she’s taken since her debut. 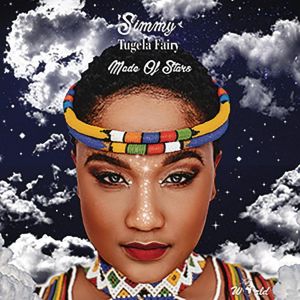 “Tugela Fairy (Made Of Stars)” is Simmy’s sophomore album, a 16-track compilation in which Simmy tells her story in its many colours, bringing elements of house, maskandi, RnB and gospel into a sumptuous whole that will leave you salivating for more.

“Tugela Fairy (Made Of Stars)” begins with an intro that will stir in your spirit a desire for the bucolic and edenic, away from all the noise and chaos. In fact, we imagine this song can serve a lullaby function.

In “Indaba,” Simmy takes us into the orbit of love and her discoveries therein. You know the kind of love that literally spins your head and your thoughts, making you unable to think straight? There you have it elaborated in “Indaba.”

This is but one of a couple of love songs in the project. In “Imihla Nezolo,” which occupies the fifth position on the tracklist, SImmy returns to the letters of love, via a different route, and you just might forget you have listened to another love song on the tracklist previously.

While “Maphungu” isn’t exactly a love song, it takes the listener into the orbit of relationships and how guys of old usually approached the ladies. The process is fairly straightforward and a guy usually knows the girl pretty well, leaving no avenues for serious frictions in the future if they should decide to settle down together.

It is a process only a few people are prepared to take today.

In “My Light,” a world of optimism opens before the listener. Here, you find Simmy looking into herself and the experiences around round for light to navigate difficult moments. Ultimately she ended up giving light, via the song, to those who would receive.

The next song, “We Were Here,” is the de facto anthem for dreamers – the ambitious out there, who never doubt that in spite of the struggles, they will one day find the much desired place in the sun and luxuriate in flowering dreams.

“Uhlale Wazi” is a song of great emotional energy that might remind you of the loss of someone dear. Who hasn’t experienced loss at some point?

In sum, “Tugela Fairy (Made Of Stars)” is a compilation worth the wait and a splendid advertisement of Simmy’s musical growth. For that we are rating the album a 4.5

Tags
Feature Maskandi Review Simmy
John Israel A Send an email 9 November 2020
Back to top button
Close
We use cookies on our website to give you the most relevant experience by remembering your preferences and repeat visits. By clicking “Accept All”, you consent to the use of ALL the cookies. However, you may visit "Cookie Settings" to provide a controlled consent.
Cookie SettingsAccept All
Manage Privacy