Nicki Minaj and Lil Baby are “Bussin” in a new song, and it appears the world can’t have enough of their collaborative energy.

It is not the first time these rappers have worked together, but we count their latest drop a favorite from them so far. One thing that cannot be missed is the musical synergy between them.

They flowed so well together that the default reaction to “Bussin” is to expect another joint jam from the duo. Not having ruled out working together again, they make it okay to hope another killer drops after this.

In the interim, of course, y’all a better off savoring what’s steaming hot on the table.

Before the release of the number, Barbie herself had hared the cove art with her 174 million followers, bidding them look forward to it.

The song has two versions, the explicit and the “clean.” There appears to be a little mix-up in the release, and she’s left a disclaimer on her Instagram page for her fans. 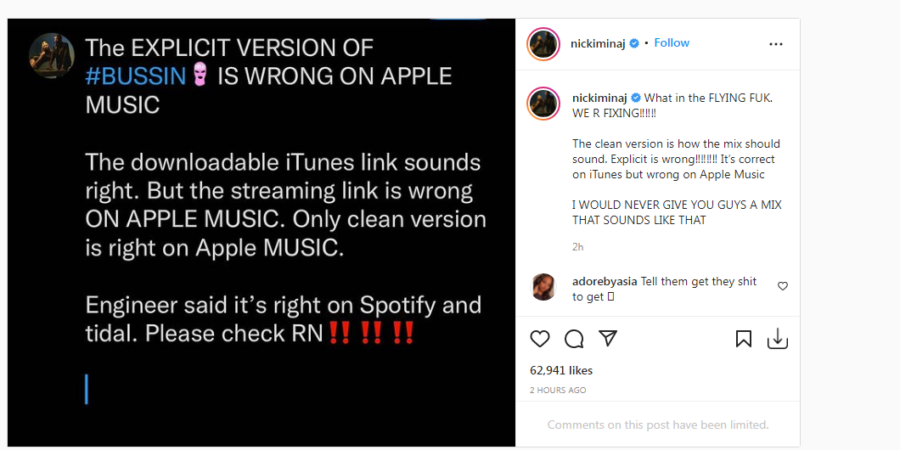 The disclaimer notwithstanding, “Bussin” sounds like a number many music lovers out there would take for an anthem this Valentine’s day and beyond. You have our support to check out this wild wave. Come on!

Tags
Hip Hop Lil Baby Nicki Minaj USA
John Israel A11 February 2022
Back to top button
Close
We use cookies on our website to give you the most relevant experience by remembering your preferences and repeat visits. By clicking “Accept All”, you consent to the use of ALL the cookies. However, you may visit "Cookie Settings" to provide a controlled consent.
Cookie SettingsAccept All
Manage Privacy