Although Anele Mdoda is a fan of Kelly Rowland, she insists that the former Destiny Child’s singer is not prettier than former bandmate Beyoncé and will never be.

So when Kelly posted a picture looking as beautiful as can be, Anele Mdoda found herself trending again, as fans sought her opinion once again on Kelly Rowland’s new picture.

Anele stuck to her old opinion, though. And for those who gave her suggestions on how to stay away from Mzansi’s trending list, Anele Mdoda would they just let her trend, as the publicity actually pays her bills. In fact, she made it clear that she actually likes trending and she enjoys it whenever she trends each time Kelly Rowland shares a new picture. 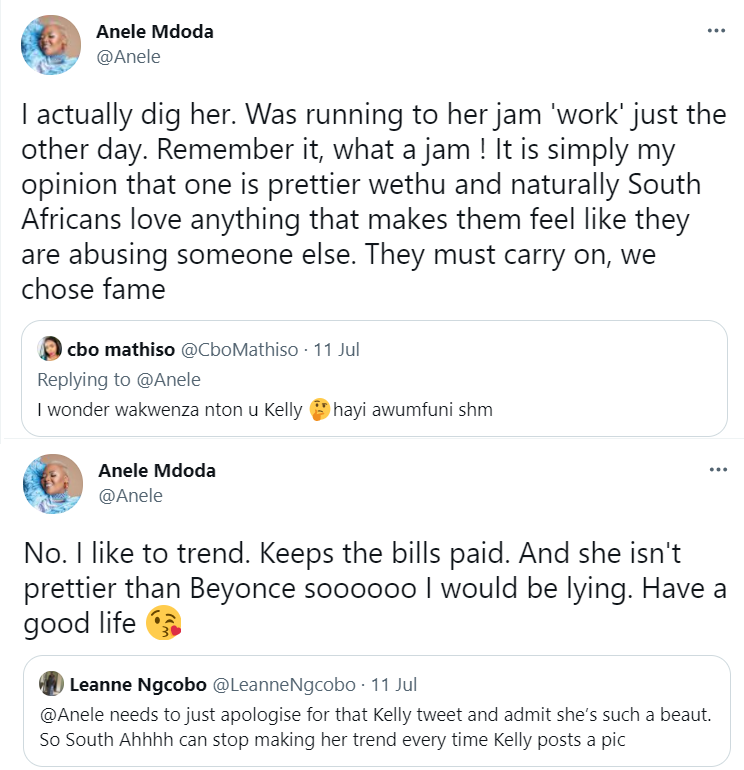 By the way, Anele Mdoda is one of the most loved figures on South African television. The TV host’s most striking feature is her gap tooth, and she never hesitates unleashing her toothy smile.

Well, do you share Anele Mdoda’s verdict on Kelly Rowland? You may want to join the conversation by dropping your thoughts in the comment section below.

Tags
Anele Mdoda
John Israel A Send an email 13 July 2021
Back to top button
Close
We use cookies on our website to give you the most relevant experience by remembering your preferences and repeat visits. By clicking “Accept All”, you consent to the use of ALL the cookies. However, you may visit "Cookie Settings" to provide a controlled consent.
Cookie SettingsAccept All
Manage Privacy