“One Last Time” singer, Ariana Grande has joined forces with Pledge (a charity-centric fundraising platform) to launch a new fund tagged “Protect & Defend Trans Youth”. According to the Grammy-winning singer, the fund was founded “to support organizations providing direct services and advocating for the rights of trans youth”.

The fund was launched late last month on Thursday, March 31, the same day as the International Transgender Day Of Visibility. Its principal purpose is to fight against transphobic legislation in the US. This includes the bills launched in Arizona and Texas, working against the rights of Transgender children. During the launch of the “Protect And Defend Trans Youth Fund”, the “Needy” singer said in a statement;

“Right now, their hundreds of bills pending in state legislatures across the United States that target trans youth and aim to curb their rights. The impact of fighting these anti-trans bills and policies is felt all year by trans people, their families, and loved ones.”

Grande urged people to join her “in donating to this fundraiser which will provide critical funds to organizations advocating for the rates of trans youth in states currently targeted by anti-trans policies.” She will be matching donations of up to $1.5 million made to the fund. The entire fund will be split between 19 organizations, including One Iowa, Equality Florida, and more. 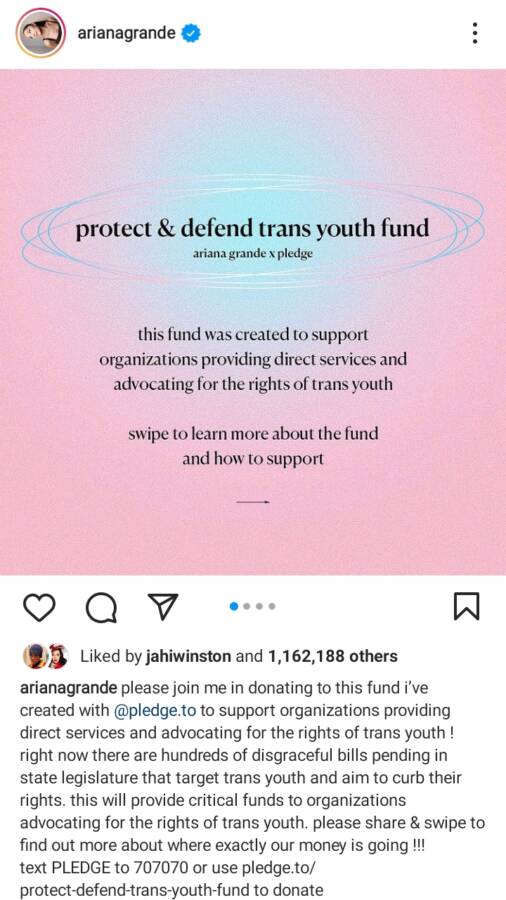 Tags
Ariana Grande
John Jabulani Send an email 11 April 2022
Back to top button
Close
We use cookies on our website to give you the most relevant experience by remembering your preferences and repeat visits. By clicking “Accept All”, you consent to the use of ALL the cookies. However, you may visit "Cookie Settings" to provide a controlled consent.
Cookie SettingsAccept All
Manage Privacy