AKA recently won the court battle over the ownership of The Braai Show, with the court ruling that true to his claim when he filed his case, he owns a 50 per cent stake in the show.

AKA had been at odds with Cake Media, his partner on the show, over hiring his rap rival Cassper Nyovest as host of the show’s second season. (AKA had hosted the first season).

AKA insisted he wasn’t consulted before Cassper Nyovest was hired. He also averred that he owns a 50 per cent stake in the show, which Cake Media denied.

Well, the court ruled in his favour.

AKA is happy over the successful litigation, and he’s also gearing to draw some more blood. In a tweet soon after, he’d shred his plans to sue every person or organization that benefited from the show.

Cassper Nyovest benefited from the show because he promoted his alcohol and shoe brand on the platform while he was the host. So he might be among AKA’s targets in his next legal adventure.

Reacting to a fan who wanted to know his thoughts about it all, Cassper Nyovest insisted nothing would happen ever. 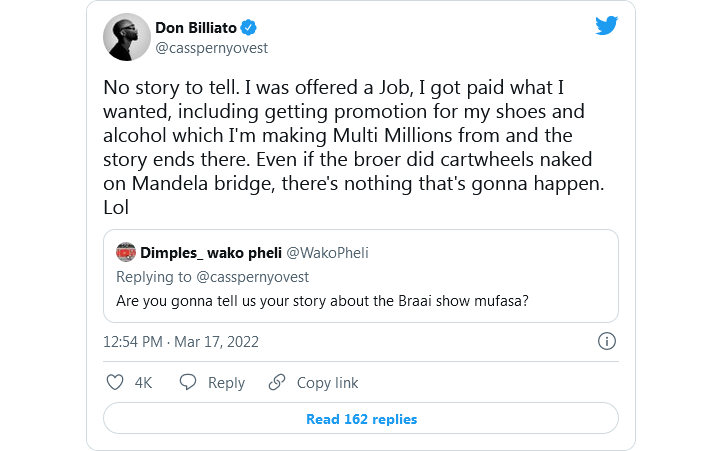 How true that is will be known soon.

Tags
AKA Cassper Nyovest
John Israel A Send an email 18 March 2022
Back to top button
Close
We use cookies on our website to give you the most relevant experience by remembering your preferences and repeat visits. By clicking “Accept All”, you consent to the use of ALL the cookies. However, you may visit "Cookie Settings" to provide a controlled consent.
Cookie SettingsAccept All
Manage Privacy