It looks like the Scorpion King DJ Maphorisa is tired of his “kingdom” and is looking forward to heading elsewhere with his satraps.

The above appears facetious, but DJ Maphorisa is apparently tired of the economic exclusion of Africa and is even considering relocating to the United Kingdom. He made this known in a recent tweet.

First, he had shared a map showing the economic hubs of the world, symbolized by a storm of jets. Africa was markedly missing. And DJ Maphorisa is sad about this. The way forward for him, he thinks is relocating, and he already has a country in mind. 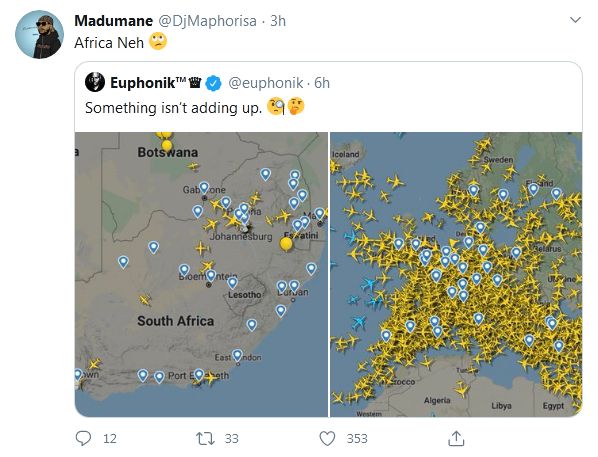 His plans to relocate have sparked a debate among his fans. While some welcome the idea of him moving to the United Kingdom, which they think will better recognize his talents, others are of the opinion he would not flourish there as the United Kingdom is not an amapiano hub; South Africa is.

It is unknown is DJ Maphorisa was actually serious about relocating to the United Kingdom or was merely playing around. Anyway, the coming months should reveal a lot.

Well, what do you think of DJ Maphorisa’s plans to relocate? You might wish to join the conversation by dropping your thoughts in the comment section below.

Tags
Dj Maphorisa
John Israel A Send an email 12 August 2020
Back to top button
Close
We use cookies on our website to give you the most relevant experience by remembering your preferences and repeat visits. By clicking “Accept All”, you consent to the use of ALL the cookies. However, you may visit "Cookie Settings" to provide a controlled consent.
Cookie SettingsAccept All
Manage Privacy