At the time, his fans were unanimous the allegations were balderdash – an ttempt to malign the integrity of the man they call their hero. The gospel minister, who was arrested along with his wife and then released on bail, has since spoken up about his arrest.

His words were without the details the public had expected, though. In a tweet, “The Wafika Story” hitmaker had asked of the welfare of his fans while affirming he is well himself. He thanked those who have been supporting him and his family in the wake of the allegations of looting levelled against him.

But then he also made it clear he would not be commenting on the issue of his arrest as it is before the courts. He had apparently been advised to keep mum on the subject by his attorney. You can check out his tweet below. 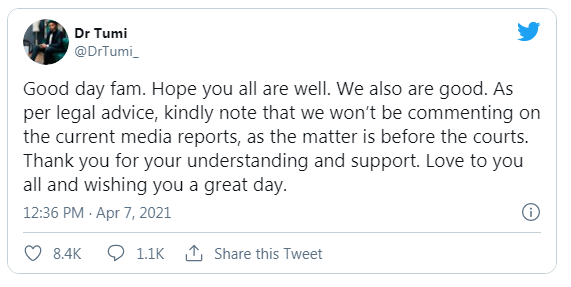 We’re following the case keenly and will bring you more details as they drop. In order not to miss them, you might want to follow our social media channels.