August is almost here and so, by the way, is Kelly Khumalo’s reality television show, Life With Kelly Khumalo.

The show promises to show the songstress in her disparate hues: the good and the glamorous, the bad and the ugly… On the strength of this promise alone, fans are already salivating.

Kelly Khumalo is an interesting personality, feared by some, because they think – really assume – she evince a fatal emanation, given the trajectory of her past relationships, including that with former Bafana Bafana goalie, Senzo Meyiwa.

In fact, it was for this reason her relationship with Chad Da don was fiercely opposed by many on social media, with some stating he would die if he married her. Well, whatever the reason, Chad Da Don and Kelly Khumalo eventually broke up. But they are reportedly still friends.

The trajectory of her relationships will feature in the 13-episode show produced by Legend Manqele, who had handled shows for other celebs previously.

The show, which has apparently been delayed by the coronavirus pandemic, will premiere on ShowMax on 6 August. 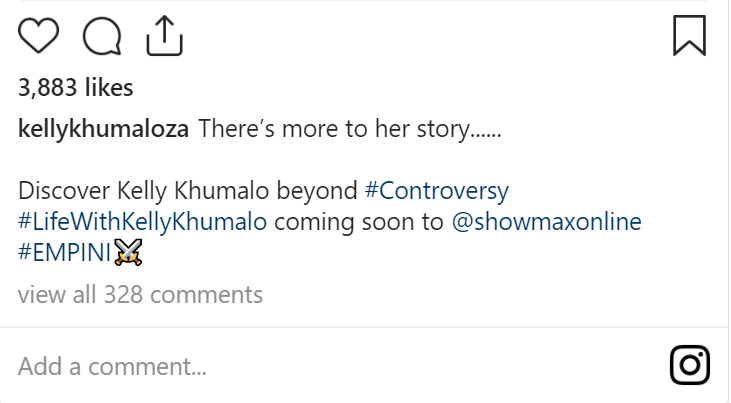 Are you ready for what is to come? You might wish to join the conversation by dropping your thoughts in the comment section below.

Tags
Kelly Khumalo
John Israel A Send an email 14 July 2020
Back to top button
Close
We use cookies on our website to give you the most relevant experience by remembering your preferences and repeat visits. By clicking “Accept All”, you consent to the use of ALL the cookies. However, you may visit "Cookie Settings" to provide a controlled consent.
Cookie SettingsAccept All
Manage Privacy