If there is any marketable artist in the country, it is Kwesta. We are not saying he’s the most, but he sure does have a following who would gobble up whatever he is selling. All the endorsements he’s bagged over the years are testament to this fact.

Taking to social media on Friday, November 13, the Mzansi star shared a video to the platform. The video was captured by a brand new phone which was gifted him by the popular Huawei company. According to him, it is the PSmart 2021 which isn’t even out yet.

Oh how we’d like to be him right now. He also revealed that the phone is “too clean” while also hyping the features and its 48 megapixel camera. We really think we need that phone in our lives. Kwesta has worked with top brands including Heineken, Telkom, Urban Art, Butan and Russian Bear. 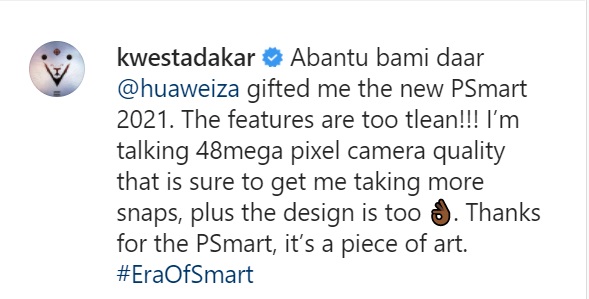 Tags
Kwesta
John Jabulani Send an email 17 November 2020
Back to top button
Close
We use cookies on our website to give you the most relevant experience by remembering your preferences and repeat visits. By clicking “Accept All”, you consent to the use of ALL the cookies. However, you may visit "Cookie Settings" to provide a controlled consent.
Cookie SettingsAccept All
Manage Privacy