Media personality Pearl Thusi has fired a mordant shot at herself for not always getting it right with her writing.

In a recent tweet, the celebrated actress noted that she hates typos but will never remember to proofread. Fans jumped on the tweet near-instantly, with some of them sharing their experiences writing.

One of her fans noted that proofreading was a scam because she always ends up reading what she wants to write and not what she actually wrote.

Another fan jocularly asked if she was canceling her Valentine’s date with Mr. Smeg with a typo. Mr. Smeg is a popular South African figure who goes everywhere with a red Smeg kettle.

She and Pearl Thus had earlier had a date with was televised and trended with the hashtag #NationalLunchDate.

And yet another fan joked that Pearl Thusi’s post reminded him of his PhD thesis which was a real pain to proofread. You can check out some responses below. 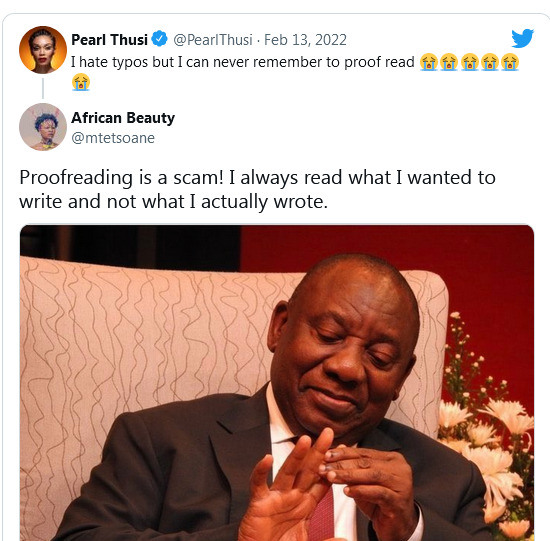 Pearl Thusi is a controversial figure on Mzansi social media, always speaking her mind. And while this has endeared her to many on social media, it has also earned her many adversaries. She doesn’t care much for the opposition to her personality though. For now, the focus is on her typos. Lol.

Tags
Pearl Thusi
John Israel A Send an email 15 February 2022
Back to top button
Close
We use cookies on our website to give you the most relevant experience by remembering your preferences and repeat visits. By clicking “Accept All”, you consent to the use of ALL the cookies. However, you may visit "Cookie Settings" to provide a controlled consent.
Cookie SettingsAccept All
Manage Privacy