In a move that has shocked many social media users, comedian Pete Davidson has removed the tattoos he had on his body to affirm his love for Kim Kardashian. The SNL host had a couple of tattoos on his body to show just how in love he was with Kanye West’s ex-wife.

One of the tattoos reads, “my girl is a lawyer.” With the relationship broken asunder, the comedian has rethought his tats and decided they have no place on his body any longer.

One man who would be immensely pleased with the whole thing is Kane West, who had the worst relationship with Pete. He had claimed at some point that the comedian was preventing him from seeing his children with Kim. 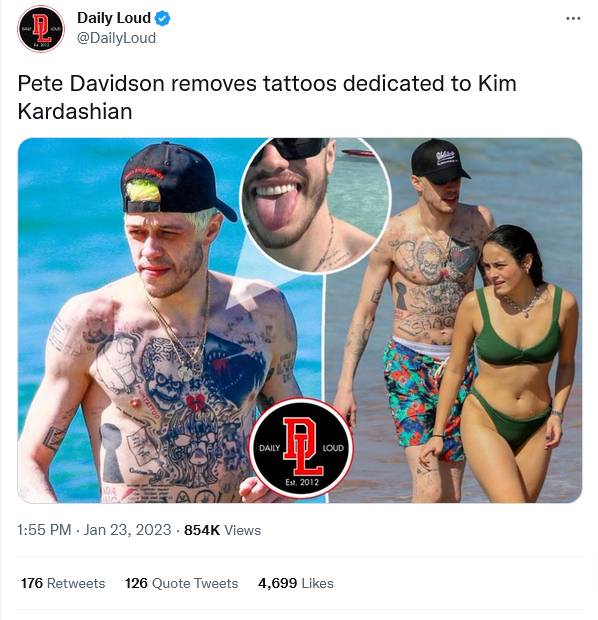 In the heat of his anger at some point, he had even released a video showing him burying alive the anime version of the comedian. But with Pete no longer in the picture, the eccentric “Donda” rapper should be fine.

Well, for some netizens who have reacted to the tattoo erasure, it is nothing short of weird. One person who has said nothing about the whole tattoo noise is none other than the woman he recently split with.

Kim Kardashian is plodding ahead solo.

Tags
Pete Davidson
John Israel A25 January 2023
Back to top button
Close
We use cookies on our website to give you the most relevant experience by remembering your preferences and repeat visits. By clicking “Accept All”, you consent to the use of ALL the cookies. However, you may visit "Cookie Settings" to provide a controlled consent.
Cookie SettingsAccept All
Manage Privacy