Somizi had got Mzansi talking – again. This time it has nothing to do with relationship drama or even a priceless joke. Nah. The former idols SA judge shared a picture of him butt naked. And then he took down the picture again.

But then many of his fans have already saved the picture, which showed him standing by the side of a pool and looking into what appears to be a beach ahead of him. There was no one close by.

In the caption to the said picture, Somizi had indicated that it was taken by his close pal Vusi Nova. Vusi and Somizi have a close relationship. And at some point peeps had thought that they were dating. They had a falling apart recently but made up again when Somizi brought food and some flowers to Vusi Nova’s house.

Well, the picture of a butt-naked somizi may have been taken down, but “The Cleaner” Mr. Rumani had saved the picture. He shared it again on Twitter, wondering ut loud if Somizi was drunk.

Is Somizi drunk? He posted and deleted this within seconds😭🙉 pic.twitter.com/kaoQsJpkQo 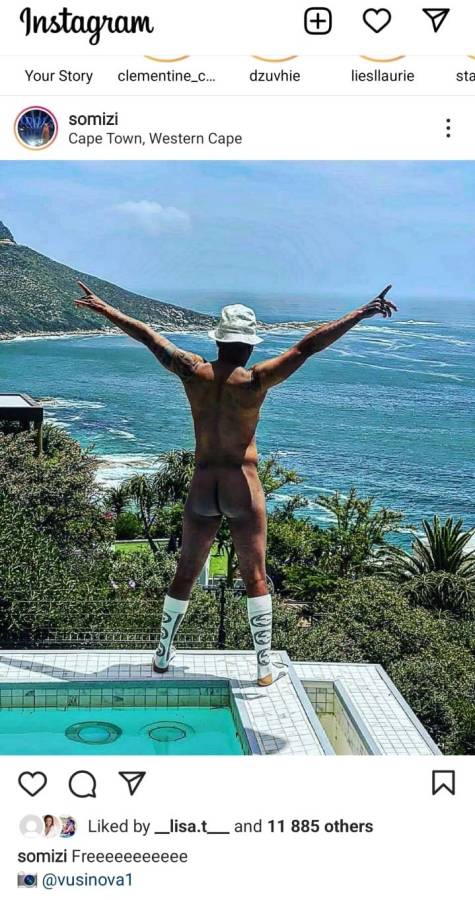 This isn’t the first time Somgags would go naked, though. He’s gone naked before the camera previously after he lost a bet while judging reality show Idols SA.

Tags
Somizi
John Israel A Send an email 3 January 2022
Back to top button
Close
We use cookies on our website to give you the most relevant experience by remembering your preferences and repeat visits. By clicking “Accept All”, you consent to the use of ALL the cookies. However, you may visit "Cookie Settings" to provide a controlled consent.
Cookie SettingsAccept All
Manage Privacy