Zakwe and Duncan announce plans to drop joint project before the end of the year.

While we enjoy all the new music that have dropped this year, and prepare for the promised ones dropping soon, there is even more on the way. SA Hip Hop is proving to be a strong contender for the most releases in 2020.

According to most, the genre hasn’t been so successful this year, but recent projects seem to have changed its luck. Now, Zakwe and Duncan have announced a new collab dropping before the year ends. No, it isn’t just one song, but a list of songs. In other words, they’ve got a joint project dropping.

In recent comments made on social media, the two SA Hip Hop stars revealed that the project would be titled “Timon & Pumba”. They have also shared the release date to be in November 2020. This is another joint collab to look forward to after Blaklez’s “Lost Diamonds” with PdotO. 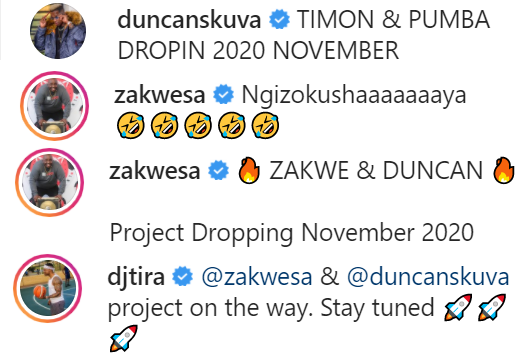 Tags
Duncan Zakwe
John Jabulani Send an email 7 September 2020
Back to top button
Close
We use cookies on our website to give you the most relevant experience by remembering your preferences and repeat visits. By clicking “Accept All”, you consent to the use of ALL the cookies. However, you may visit "Cookie Settings" to provide a controlled consent.
Cookie SettingsAccept All
Manage Privacy