If you have been following Afrotainment boss DJ’s social media accounts, you probably know he has been promoting the Huawei P40, one of the most sophisticated smartphones from the Chinese tech giant.

Now the celebrated disc jockey and producer has taken the promotion of the phone a tip higher, announcing a formal launch. In a recent Instagram post, the “Uyandazi” crooner asked fans not to miss the official launch tomorrow (today 12 June 2020) by 5pm.

The launch is in partnership with Vodacom South Africa, one of the top telcos in the Rainbow Nation, but will also have celebs like Zinhle and Naak Musiq on the launch circuit. Participants have the chance to win lots of prizes, according to DJ Tira. 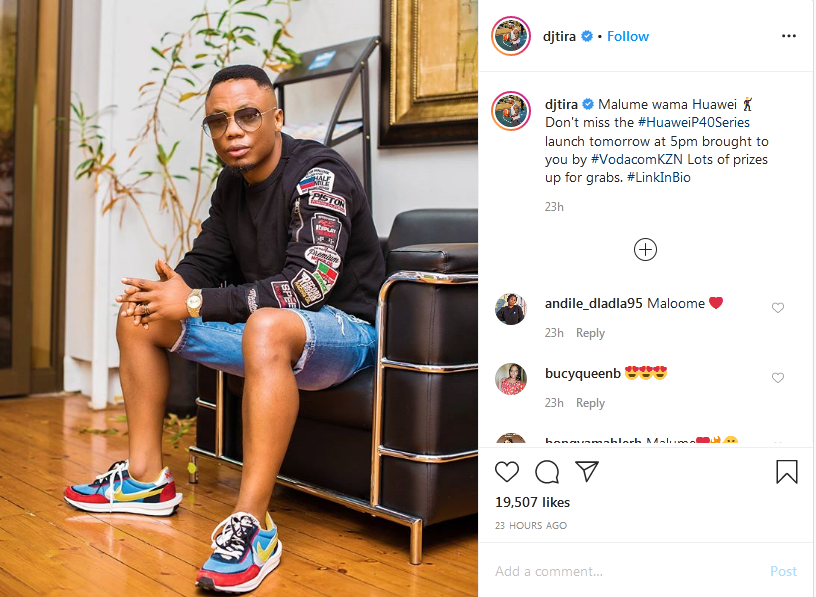 Taking to Facebook, Huawei stated the promotion is open to South Africans only, and all participants have a chance to win 1 0f 20 Huawei FreeBuds Lite devices valued at approximatelyR1 499 (one thousand four hundred and ninety nine rand).

There are only 20 competition prizes and therefore only 20 winners. Anyone keen on participating will have to share or retweet “VodacomKZN and HuaweiP40Sereis Live Stream-Stand a chance to win” posted on the Facebook link: https://www.facebook.com/HuaweimobileZA/ or Twitter: https://twitter.com/HuaweiZA/, tag three friends in the comment seection and use the following hashtag #HuaweiP40Series and #VodacomKZN.

Winners will be picked at random. Are you ready to win big? You know what to do.

Tags
DJ Tira Huawei Vodacom
John Israel A Send an email 12 June 2020
Back to top button
Close
We use cookies on our website to give you the most relevant experience by remembering your preferences and repeat visits. By clicking “Accept All”, you consent to the use of ALL the cookies. However, you may visit "Cookie Settings" to provide a controlled consent.
Cookie SettingsAccept All
Manage Privacy