DJ Zinhle is trending in Mzansi but not for the best of reasons – at least it isn’t for a reason she would want to.

She is trending because AKA has apparently given his latest girlfriend Nelli Tembe an engagement ring. Not only did he give her that ring, he flaunted a picture of Nelli Tembe rocking the ring. 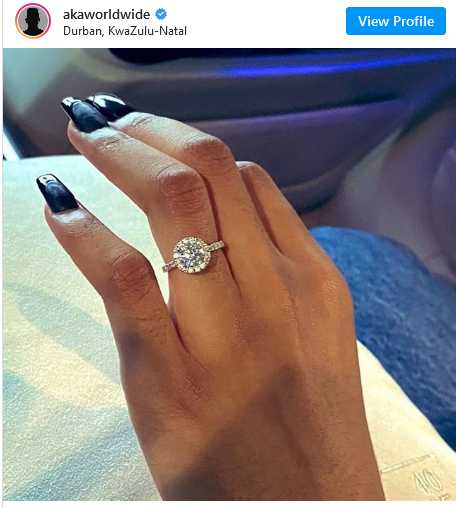 AKA and DJ Zinhle have a daughter, Kairo, together. The pair has had an on again and off again relationship. They were lovers, then they broke up. They made up again and broke up again. And then AKA had been photographed frolicking with Nelli.

Instead of swearing at the person who shared the picture of him and Nelli, he thanked the person and then made it clear he and Nelli are an item – as the saying goes.

Ditched a second time, DJ Zinhle focused on her work and soon found love again in the arms of fellow  muso Murda Bongz.

With AKA flaunting Nelli’s engagement ring, Mzansi socai media was set on fire. Some fans felt sorry for DJ Zinhle, thinking AKA didnt treat her as well as he is treating Nelli. Others mere congratulated AKA on his heart move. What Do you think?

Tags
AKA DJ Zinhle Nelli Tembe
John Israel A Send an email 23 February 2021
Back to top button
Close
We use cookies on our website to give you the most relevant experience by remembering your preferences and repeat visits. By clicking “Accept All”, you consent to the use of ALL the cookies. However, you may visit "Cookie Settings" to provide a controlled consent.
Cookie SettingsAccept All
Manage Privacy