We reported yesterday that Beyoncé was working on a new film titled Black Is King, which is influenced by Disney’s The Lion King. Well, it has emerged that some fine voices in Mzansi music and entertainment have got spots in the flick which premieres internationally on 31 July.

Nandi Madida, Connie Chiume, Warren Masemola, John Kani and Nyaniso Dzedze are on the guest list in the flick. 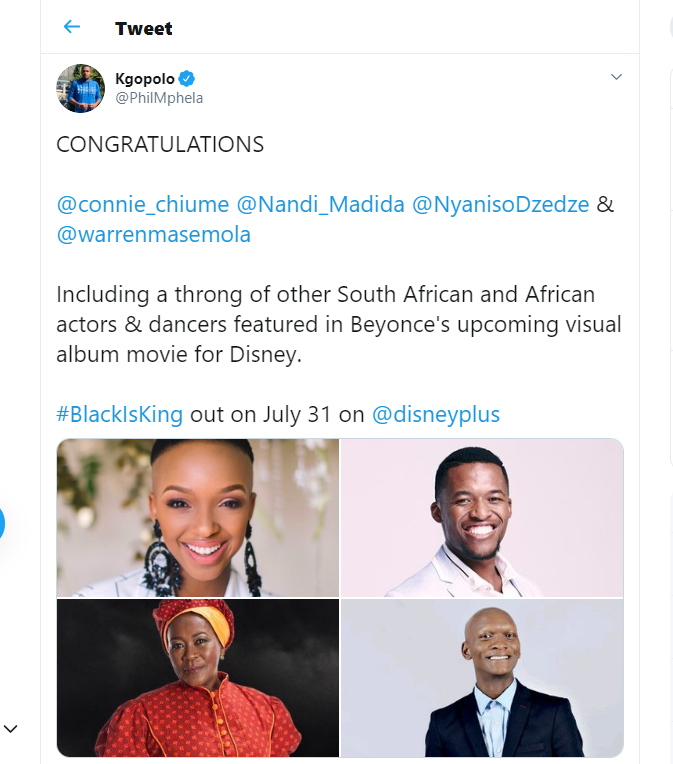 Nandi Madida, who is married to Zakes Bantwini, is a musician and television host. She also occupies the office of a model. She is pretty good in all her roles. A look into her history shows an abiding love for Africa.

Among her notable songs, you find “Dance” and “In My Skin.”

Connie Chiume is an actress, outstanding in her role. She had featured on critically acclaimed films like “Black Panther” (2018) and “Queen Sono” (2020). She is still active.

Warren Masemola is himself an actor, notable for his role as Lentswe Mokethi on the soap opera Scandal.

Probably the oldest figure on the list, John Kani is an actor, playwright and movie director.

Well, what do you make of this list of Mzansi acts on the flick?