Safta award-winning actress, Brenda Ngxoli, who takes on the role of Noma Matshikiza on telenovela “The Queen,” has thrown in the towel with her being part of the tv show over salary issues.

Brenda’s decision to call it quits with the Mzansi Magic telenovela has drawn some unwanted attention to Ferguson Films and how it caters to actors. Brenda became a part of the Ferguson Films production in 2020 at the end of a seven-year-long sabbatical at home in the Eastern Cape. She acted as NomaPrincess’ Noma’ Matshikiza, Harriet Khoza’s old friend who walked in with a ton of issues. That, according to her, was also her most challenging role

Brenda has dusted and hung up her boots, allegedly walking away from “The Queen” over salary-related issues. This development was brought to light by entertainment and celebrity commentator, Phil Mphela, as broke the news of Brenda’s departure from the Mzansi Magic telenovela on his Twitter page:

After almost 3 years playing Noma on the Mzansi Magic telenovela, Ngxoli has left. Words is … she had a salary issue that could not be resolved,” Phil wrote. 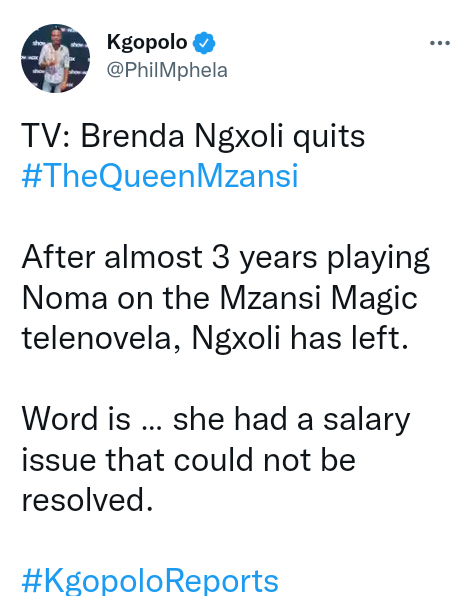 This wouldn’t be the first time an actor would be leaving the Ferguson Films production, and it almost always over salary-related issues.

Tags
Brenda Ngxoli Mzansi Magic
Ikedichim Chibundu28 February 2022
Back to top button
Close
We use cookies on our website to give you the most relevant experience by remembering your preferences and repeat visits. By clicking “Accept All”, you consent to the use of ALL the cookies. However, you may visit "Cookie Settings" to provide a controlled consent.
Cookie SettingsAccept All
Manage Privacy