Cassper Nyovest has surprised his manager Tlee Moiloa with a brand new Rolex watch. Lerato “Tlee” Moiloa was celebrating his birthday, and the Family Tree boss decided to spoil him with a symbol of royalty.

Tlee has been Cassper Nyovest’s manager for the past ten years. You may as well say that he’s been a manager to the “Any Minute Now” rapper from when he was a nobody in South African rap.

In the intervening years since then, Tlee had stuck to Cass, and the rapper has nothing but positive words for him – unlike what he’d say about his rap “brothers.”

Exactly three years ago, fans had spoken of the possibility of Cassper Nyovest waking up one day and stating he no longer has a manager and cannot be managed a la Kanye West. But Cass had dismissed that, stating that Tlee was more than a manager. He describes him as family.

Not possible,Tlee is a blessing in my life. It’s more than business. That’s my big brother. My real big brother,Not the Type of big brother or O.G that call themselves that so that they can bully you or abuse you. Tlee really really helped me build this, selflessly so. I love him https://t.co/SnxLC0PXBa 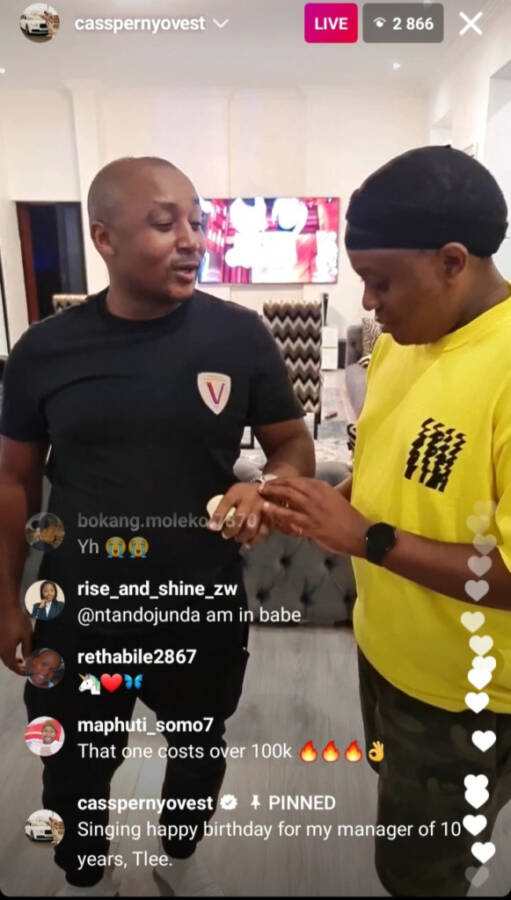 Well, Cass has just affirmed the brotherhood thing by gifting Tlee a Rolex, a gesture he had previously only extended (to the best of our knowledge) to his baby mama Thobeka Majozi.

Well, who wouldn’t love such bromance? It remains to be seen who would benefit next from Cassper’s generous spirit.

Tags
Cassper Nyovest Tlee
John Israel A Send an email 4 January 2022
Back to top button
Close
We use cookies on our website to give you the most relevant experience by remembering your preferences and repeat visits. By clicking “Accept All”, you consent to the use of ALL the cookies. However, you may visit "Cookie Settings" to provide a controlled consent.
Cookie SettingsAccept All
Manage Privacy